Changing Dynamics of the First, Second and Third Approximations of the Exponential Chaotic System and Their Application

Abstract In this manuscript a chaotic system with exponential term has been considered and studied. Its basic dynamical properties such as time series, phase plots, Lyapunov exponents, bifurcation diagrams, equilibrium points, Poincare section etc. have been discussed and compared with its first, second and third approximate systems. The main aim of this study is to explore the dynamics of the approximations of the exponential chaotic systems. Also, the controllers have been designed to synchronize the chaotic system and its approximations using a technique “compound combination synchronization” and show its application in the field of secure communication. Simulations have been provided to show the efficacy of the used method. Keywords Exponential chaotic system · Dynamical analysis · Approximations · Compound combination synchronization · Secure communication Mathematics Subject Classification 37D45 · 37N35 · 37E99 · 37F99

Introduction With the discovery of the chaotic Lorenz system [22–24,35,44] in 1960, to have a better understanding of the chaotic systems the dynamical analysis of the systems was undertaken. Different chaotic systems such as Chen system and Lu system were analyzed and their dynamics were compared with the Lorenz system. Thorough analysis and comparison between such systems led to interesting results. With time various new chaotic systems were introduced which either represent some natural or social phenomenon such as generalized Lotka Volterra system which is the prey–

predator model or the financial model. These models provide a better understanding about the phenomenin. As many standard systems have been studied but now various non standard chaotic systems have been constructed with simple structures, unique properties, sensitive dependence on initial conditions and parameter values and their application in secure communication [2,12,37,47], image encryption [34,40,42,43], control systems [11,46] etc. Most of the new systems are constructed by modifying the standard systems adding quadratic or cubic terms. But adding exponential term to the existing systems have been rarely studied. The studies conducted on such systems have taken only first approximate system into consideration and limited it to only first,ignoring the fact that these may have entirely different dynamics. Motivated by the above discussion, here we have considered an exponential chaotic system and compared its dynamical properties [38] such as phase plots, time series, sym

Dynamics and Processes Proceedings of the Third Encounter in Mathema

Russia in the Changing International System

Trekking the Shore Changing Coastlines and the Antiquity of Coastal

The Changing Geography of Banking and Finance The Main Issues 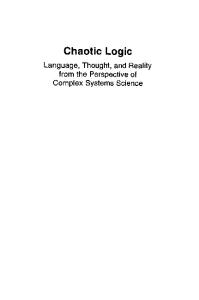 Chaotic Logic Language, Thought, and Reality from the Perspective of

Chaotic dynamics in a model of metal passivation

The Changing Faces of Space