Conjugated Polymer Network Ultrathin Films on Metal Interfaces using the Precursor Polymer Approach: Design, Synthesis and In-situ Characterization Rigoberto Advincula*1,2, Chuanjun Xia2, Prasad Taranekar1, Ken Onishi1, Suxiang Deng1, Akira Baba3 and Wolfgang Knoll*3 1 Department of Chemistry, University of Houston Houston, TX 77204 2 Department of Chemistry, University of Alabama at Birmingham Birmingham, AL 35294-1240 3 Max-Planck-Institute for Polymer Research, Ackermannweg 10, D-55128, Mainz, Germany ABSTRACT We have reported recently a novel method for cross-linking conjugated polymers involving a “precursor polymer” route, where the electrochemical method can be used to prepare ultrathin films on conducting metal and metal oxide surfaces. In this paper, we present the design, synthesis, protocol, and recent results in the application of these thin film materials. An emphasis will be given on how these films are characterized in-situ by a combined surface plasmon spectroscopy (SPS) and electrochemical approach. As a methodology, the concept can be extended to new methods of electrodeposition, patterning, and grafting of conjugated polymers on electrochemically addressable metal surfaces. Compared to spin-cast or electropolymerized monomer films, they are very robust both thermally and mechanically. Other applications of these films to sensors, dielectric materials, non-lithographic patterning, etc. are currently being investigated.

INTRODUCTION Chemical cross-linking in polymers occurs with the formation of inter- or intramacromolecular covalent or ionic bonds resulting in a network. The crosslink may have the same or different chemical nature than the main chain. Often, the degree of solubility or swelling is the first noticeable physical property change together with the irreversible loss of flow properties. Depending on the cross-link density, molecular weight, and chemical nature, one may either classify these materials as either elastomeric or thermosetting in nature. The investigation of π-conjugated polymers as organic semiconductor and display materials are unprecedented, especially in its interdisciplinary scope.[1] They have been widely studied over the past decades, both for fundamental reasons and their potential applications. While these polymers are often intractable and rigid, they have been made processible by choosing proper substituents (usually alkyl groups) that are incorporated in their design and synthesis. The most well-studied polymers include: polyanilines, polypyrroles, polythiophenes, polyfluorenes, etc.[1] These polymers can undergo striking physical or chemical changes when exposed to heat, light, electric fields, various chemical moieties (dopants) giving rise to conductivity, fluorescence, reversible thermochromism, photochromism, and electrochromism. Thus, they have found applications as conducting polymers [1], polymer light emitting diode (PLED)[2], 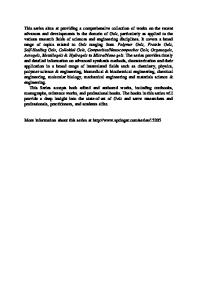