Pop-in during indentation testing is a term used to indicate the sudden displacement burst during loading. Experimental data are measured during an indentation pop-in event, using displacement sensors with 20 ls time constant at 100 kHz data acquisition rate. The load–depth response during the pop-in event that occurs within 160 ls is determined after accounting for the instruments’ dynamic response. Unlike the response reported in the literature for force-controlled tests, wherein the load on the sample remains constant during the pop-in, a steep load drop is observed after the onset of pop-in, followed by a signiﬁcant increase in the load well beyond the load at the onset of pop-in. A model for the material and instrument’s dynamic response is presented that agrees well with the experimental observations. The implications of these ﬁndings for determination of pop-in length or velocity and for performing displacement-controlled testing involving closed loop control are discussed.

Sudharshan Phani is currently a scientist at Advanced Nanomechanical Characterization Center and Center for Engineered Coatings at the International Advanced Research Center for Powder Metallurgy and New Materials (ARCI), Hyderabad, India. He was a staff scientist at Nanomechanics Inc., at Oak Ridge, USA, from 2012 to 2016, working with Dr. Warren Oliver on design and development of next-generation nanomechanical characterization systems. He received his B.Tech. degree in Mechanical Engineering from IIT Madras, India and Ph.D. in Materials Science from the University of Tennessee, USA, under Professor George Pharr and was also part of the Alloy behavior and design group at Oak Ridge National Laboratory. His research interests include smallscale mechanical characterization, modeling the dynamic response of nanomechanical test equipment and design and development of thermal spraying equipment. Recently, his work has involved developing novel test methodologies for CSM, high-speed nanoindentation mapping, high strain rate, and high temperature nanomechanical testing and multidimensional nanomechanical testing. He has also forayed into the application of machine-learning algorithms for analyzing large nanoindentation data sets.

Introduction Pop-in during indentation testing or uniaxial micro-scale testing is a commonly used term to indicate the sudden displacement burst in a force-controlled test. In some cases, it is

A critical examination of the Berkovich vs. conical indentation based on 3D finite element calculation

Reflexivity in Economics An Experimental Examination on the Self-Ref 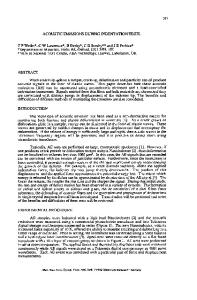 The strain-rate sensitivity of the hardness in indentation creep