are typically employed in the mixed acid pickling of stainless steels. In the pickling process, the mixed acid (HNO3/HF) removes the annealing scale and dissolves the chromium-depleted region of the alloy that was formed during the annealing process. The pickling process is, however, nonuniform because there are areas of the stainless steel with bulk composition exposed to the mixed acid while the scale from other regions is being removed. This dissolution of the bulk steel is considered an unnecessary waste of acids and critical metals such as chromium and nickel. The Bureau of Mines is concerned with the possibility of reducing the unnecessary loss of critical metals. The American Iron and Steel Institute is concerned with the excess use of acids and the generation of large quantities of solid waste. A cooperative program was therefore initiated to address both concerns. The first step in the program was to gain an understanding of the dissolution of 304SS as a function of the variables in the mixed acid pickling process. Type 304SS was chosen for this study because it is a widely used grade of austenitic stainless steel. While this alloy has been previously studied in nitric acid environments, ~ very little effort has been expended to study the effect of HF or HNO3/HF mixtures on the dissolution behavior of 304SS. Other than a review article 2 that concentrated on the dissolution of 304SS in nuclear fuel reprocessing environments, only two investigations 3'4 have been reported. These corrosion tests 2'3~4were conducted for periods ranging from 0.5 to 48 hours, with most exposures being 12 hours or longer. Though this is a short time for typical corrosion tests, it may have been too long to give meaningful results in the HNO3/HF pickling environment. It is possible that because of the rapid dissolution rate and B.S. COVINO, Jr., J.V. SCALERA, and J.P. CARTER, Research Chemists, and T.J. DRISCOLL, Research Physicist, are with Avondale Research Center, 4900 LaSalle Road, Avondale, MD 20782. Manuscript submitted April 12, 1985.

the buildup of corrosion products during the longer testing periods, the resultg were dependent on the concentration of dissolved metals in the test solution. It has been shown 2 that the addition of complexing ions such as A13§ Th 4§ NH4 § and Zr 4§ decreases the dissolution rate of 304SS. Therefore, it seemed very probable that the dissolution products of 304SS would affect the dissolution rate of 304SS. In order to properly study the dissolution behavior of bulk 304SS in typical pickling environments, it is necessary to know the dissolution rates in the presence and absence of the Fe, Cr, and Ni dissolved during testing. Samples of 304SS were tested for up to 1.5 hours in various combinations of HNO3 and HF, some containing dissolved Fe, Cr, or Ni. Tests were also run as a function of temperature, which resulted in the determination of apparent activation energies of reaction. Auger electron spectroscopy (AES), scanni 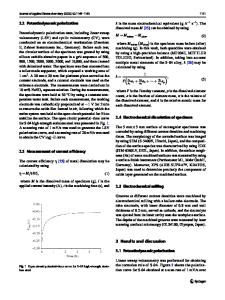