ABSTRACT We present a fluid dynamics model for the drawing of hollow multilayer polymer optical fiber. A newtonian model is considered assuming slender geometries. Hollow core collapse during drawing and layer thickness non-uniformity are investigated as a function of draw temperature, draw ratio, feeding speed, core pressurization and mismatch of material properties in a multilayer. INTRODUCTION Hollow core multilayer and microstructured optical fibers (MOF) for radiation guiding in the near and mid-infrared (IR) [1-11] have recently received close attention as they promise considerable advantage over their solid core counterparts in applications related to power guidance at almost any IR wavelength for military, industry and medical applications, IR imaging and sensing, and even THz transmission. Due to its complexity, fabrication of such waveguides is an active field of research. Four main methods have been identified for hollow core fiber manufacturing, each offering its own advantages and challenges. First method is a deposition of metallo-dielectric films on the inside of a drawn capillary by liquid-phase coating [5,6]; technical challenges in enforcing thickness uniformity in the resultant coatings limit fiber length to the distances of 10m. Second method is a capillary stacking method [7-9] where glass capillaries are arranged in a periodic manner and then drawn; so far such fibers have been mostly demonstrated to guide below 3µ m due to the non-transparency of silica and polymer materials used in the fabrication. Third method is a deposition of radially uniform thin films on a drawn substrate fiber by means of physical or chemical vapor deposition methods [10]; main challenge of this technology is presumably uniformity of the resultant coatings, and a throughput due to a relatively slow deposition process. Finally, film rolling process [11] starts with a deposition of a glass (chalcogenide) film on top of a polymer film with consecutive rolling around a mandrel tube, tube etching and drawing; potential challenges include fiber profile optimization which is somewhat nontrivial due to a strictly periodic reflector geometry imposed by the fabrication method, another potential challenge is controlling bio-compatibility of a resultant fiber. In our research group we study fabrication of all-polymer hollow multilayer fibers. Although refractive index contrast between layers in an all-polymer Bragg fiber is relatively small (at most 1.3/1.7 ), as demonstrated in [12] liquid core all-polymer Bragg fibers can be designed to guide very well both TE and TM like modes, while gas filled all-polymer Bragg fibers can guide effectively a TE polarized mode. We believe that fabrication simplicity, and potential biocompatibility of such fibers can be attractive for applications in bio-medical s 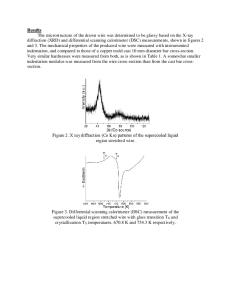