THE ability to produce bulk ultraﬁne-grained metals by equal-channel angular extrusion (ECAE), also called equal-channel angular pressing, has garnered a tremendous amount of attention over the last decade. The literature reﬂects the many attempts that have been made to investigate the factors responsible for the grainreﬁnement process in ECAE. The amount of plastic strain that is imposed on a billet is an important processing parameter for the production of ultraﬁne-grained metals. For fcc and bcc metals, by continuously imposing plastic strain, grains are gradually reﬁned. The reﬁnement process is achieved through the continuous subdivision of the original grains by dislocation walls, e.g., References 1 through 3. This process proceeds homogeneously over the entire billet. For aluminum, as the imposed plastic strain is increased, dislocation walls gradually transform into grain boundaries; meanwhile, misorientations across the boundaries are increased.[4] For copper, due to its low stacking-fault energy, the transformation of dislocation walls into grain boundaries is diﬃcult,[5–7] but misorientations across the boundaries still increase with increasing strain. Apart from the imposed plastic strain, the channel angle, F, is another important processing parameter that can inﬂuence the grain-reﬁnement process. The ﬁrst and most systematic study of the inﬂuence of the die angle on grain reﬁnement was published by Nakashima et al.[8] Their results suggested that the smaller the die angle, the more eﬀective the grain-reﬁnement process. The process route has also been reported to have a signiﬁcant eﬀect on the grain-reﬁnement process.[2,9,10] S.X. DING, Research Student, and C.P. CHANG and P.W. KAO, Professors, are with the Institute of Materials Science and Engineering, National Sun Yat-sen University, Kaohsiung, 80424 Taiwan, Republic of China. Contact e-mail: [email protected] Manuscript submitted May 8, 2008. Article published online January 6, 2009 METALLURGICAL AND MATERIALS TRANSACTIONS A

Through detailed analysis of the extruded microstructure of aluminum by transmission electron microscopy (TEM), Sun et al.[9] reported that route Bc is the most eﬀective route in terms of grain reﬁnement. Extrusion at elevated temperatures can prevent the cracking of hard materials and thus improve the workability of a billet.[11] When the extrusion temperature was increased, the minimum attainable grain size was found to be increased and the fraction of high misorientation boundaries was found to be lower.[12–14] The workability of a billet was reported to be improved signiﬁcantly by using a low extrusion speed to process titanium and 4340 steel.[11] The extrusion speed was reported[15] to have no inﬂuence on the grain size of aluminum and its alloys subjected to ECAE. Despite the fact that the aforementioned conclusions were mainly drawn from the experimental results involving fcc metals, they appeared to be widely accepted in the literature regardless of the crystal structure of the material being processed. Over 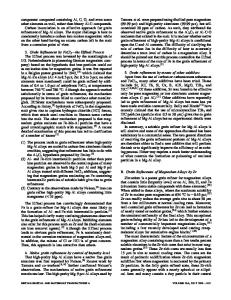 The role of solute in grain refinement of magnesium