ELECTRORHEOLOGICAL FLUIDS: STRUCTURE FORMATION, RELAXATION, AND DESTRUCTION THOMAS C. HALSEY* *The James Franck Institute and Department of Physics, The University of Chicago, Chicago, Illinois 60637 ABSTRACT In a strong electric field, the qualitative behavior of electrorheological fluids is dominated by the dipolar interactions between the colloidal particles. When thermal effects can be ignored, the ground state of a system of dipolar particles is an ordered solid. However, long-range ordered structures are rarely seen in experiment. When a high electric field is applied to a fluid, dielectric columns oriented parallel to the field rapidly form. The relaxation of these columns is a much slower process. I calculate the shape of the columns formed and the time scale for the relaxation of the columnar structure. I also discuss how this structure formation is altered in the presence of a shear flow. INTRODUCTION While the rebirth of interest in electrorheological (ER) fluids is primarily driven by their possible technological importance, these fluids are also of great scientific interest. The dominant force between particles in ER fluids is generally dipolar; thermal and hydrodynamic forces are also significant in some circumstances. The statistical mechanics of particles interacting via dipolar forces is quite subtle, because one cannot assume that the dominant influence over a particle is due to its local environment. The dipolar force is also anisotropic, which leads to additional effects. Microscopic dipole forces tend to be weak; dipolar effects generally appear either at large length scales, as in the domain structure of a magnet, or at low temperatures, as in a system of magnetic spins in an insulator. 1 ,2 In ER fluids, the importance of the dipolar interactions arises from the large size of the particles. In this contribution, I will first discuss the ground states at high field of systems of dipoles. I will then discuss the kinetics of structure formation in ER fluids, and the longtime relaxation of the structures obtained. Finally, I will review some recent ideas on the shear-thinning viscosity of ER fluids. DIPOLAR LATTICES I model an ER fluid as a suspension of spherical dielectric particles of radius rd and dielectric constant cd in a non-conducting solvent with unit dielectric constant. For the qualitative properties that I shall consider, the additional non-dipolar interactions are largely irrelevant. Mat. Res. Soc. Symp. Proc. Vol. 248. 01992 Materlals Research Society

The fluid is confined between conducting plates of an infinite parallel plate capacitor with plate separation L. When there is no electric field present, the particles are distributed randomly throughout the fluid. When a field is applied, the spheres acquire dipole moments =- flr 3 •oc, where

of the spheres. If 63< 1 then we can write Eoc "i Ei, where i is the normal to the plates. The interaction energy of two spheres separated by F;, with an 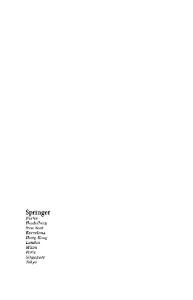 Cyclic Growth and Destruction of Volcanoes

Palmyra: From War and Destruction to Rehabilitation

Morphology and Formation of Fibrillar Structure in Pbo Fiber