Polycrystalline copper (99.9%) was fatigued at a total strain amplitude of 0.1 and 0.2%, respectively. The tests were performed in situ under vacuum in a Large Chamber-Scanning Electron Microscope. By a repeated combination of in situ fatigue testing and ex situ focused ion beam milling, a deep insight into the mechanism of fatigue crack initiation and early stages of crack initiation at persistent slip bands (PSBs) and their interaction with grain boundaries was obtained. The EBSD-technique showed early slip activation and the exclusive formation of extrusions in favorably oriented grains until a certain extrusion height was reached. At the total strain amplitude of 0.2%, extrusions are formed not only in favorably oriented grains but also in grains with a lower Schmid factor due to high compatibility stresses at the grain boundaries. Extrusion growth through grain boundaries is affected by the orientation of the primary slip systems in the neighboring grains and the additional anisotropy stresses. It is concluded that early stages of crack initiation are the consequence of the formation of extrusions at PSBs in combination with the clustering of vacancies along the PSB boundaries, as it was proposed by the well-known Essmann–Gösele–Mughrabi model.

Since the pioneering work of Wöhler in the 19 century, the fatigue behavior of metallic materials has been studied extensively. However, many details of the basic fatigue mechanisms leading to failure of the material under cyclic loading have remained unclear. Ewing and Humphrey were the ﬁrst to describe the occurrence of slip bands on the surface of fatigued steel specimens, which gradually developed into cracks.2 In 1953, Forsyth introduced for the ﬁrst time the term “extrusion” describing the observed exudations of a fatigued aluminum 4% copper alloy at the surface along slip bands. In the same paper, these extrusions were also denoted as “crystal debris at the surface”.3 Manson4 and Cofﬁn5 showed independently in the same year that the microplastic part of the cyclic deformation plays a dominant role in the onset of fatigue damage. In subsequent years, many

Contributing Editor: Lei Lu a) Address all correspondence to this author. e-mail: [email protected] b) This author was an editor of this journal during the review and decision stage. For the JMR policy on review and publication of manuscripts authored by editors, please refer to http://www.mrs.org/editor-manuscripts/. Dedicated to Prof. Dr. Haël Mughrabi on the occasion of his 80th birthday. DOI: 10.1557/jmr.2017.313

pioneering studies were performed to What types of grain boundaries can be passed through by persistent slip bands? 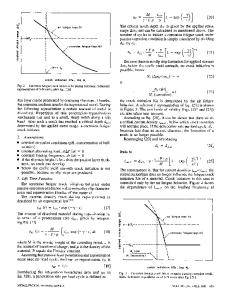 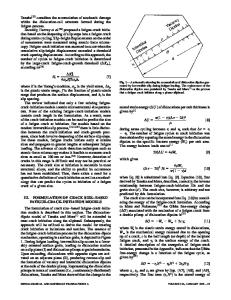