ABSTRACT We find that the carrier concentration in Stage II AsF 5graphite can be varied over a wide range, f=.30-.46. By studying the Fermi surfaces vs. f via magnetooscillations, we find that the band parameters are essentially unchanged from pure graphite. Thus suggests that all stage two compounds should display a universal behavior as a function of f, and we adduce evidence of this from the literature. We further begin an analysis of extra oscillation frequencies. In AsF -graphite, mixing frequencies are probably caused by Fermi-level modulation (Vinter-Overhauser effect), while a low frequency (ý) is associated with a superlattice.

INTRODUCTION M-agnetooscillation (M0) phenomena have great potential value in studies of intercalated graphite, giving the charge transfer, f, band parameters, and Fermi surfaces of the various compounds. Yet despite observations of oscillations in magnetization (deHaas-van Alphen--dHvA--effect), resistivity (Shubnikov-deHaas--SdH--effect), and sample temperature (magnetothermal oscillations), these studies have been of only limited value to date. This is because most experiments have found many more oscillation frequencies than are predicted theoretically. In a simple model, there should be n frequencies for a stage-n compound (n graphite layers between intercalant layers). The present paper illustrates the utility of MO studies on a particularly simple example, stage II-AsF5 -graphite. The paper is divided into three parts. The first shows that in these compounds f can be varied over wide ranges (.3-.46), and uses this variation to map out large sections of the band structure. The resulting band parameters are virtually unchanged from pure graphite. In the second part, it is shown that this last observation leads to the prediction of a universal behavior for MO oscillations in stage II acceptor compounds, which seems to be approximately obeyed by the existing data. Part three suggests possible interpretations of the additional oscillation frequencies observed in AsF 5 -graphite. VARIABLE CHARGE TRANSFER IN STAGE II

The MD observed in stage II-AsF,-graphite [1-4] are of three forms: (1) the two oscillations, A and B, expectea from a rigid band model [51, (2) combination frequencies of the form B±A, B±2A; and (3), in some samples, a low frequency, ý, which strongly modulates the A frequency. From A and B, the 4 4 charge transfer is readily fond to be (HA+HB)/ 9. MG, where Hi is the Fourier transform frequency of the i oscillation. As the samples age under gradual air exposure, the oscillation frequencies decrease significantly, even though (Oo0)-x-ray reflection spectra show that *Supported at MIT by the National Science Foundation.

Populations of Fluorine and Arsenic in AsF 5 -Graphite Intercalation Compounds 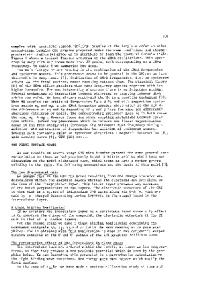 Experimental Evidence for Nitrogen as a Deep Acceptor in ZnO 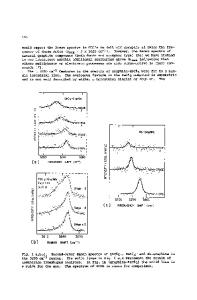