Grain refinement of superalloy IN718C by the addition of inoculants

Grain Refinement of Superalloy IN718C by the Addition of Inoculants YUHUA XIONG, JUN DU, XIUYING WEI, AIMIN YANG, LIN LIU, and DABEN ZENG Suitable inoculants for superalloy IN718C have been selected and prepared. They are composed of two ternary intermetallic compounds: Co3FeNb2 and CrFeNb. Their effects on the structures of superalloy IN718C were investigated. It is found that adding mixed inoculants consisting of Co3FeNb2 and CrFeNb to the melt could significantly refine grains of the  matrix of superalloy IN718C and increase the proportion of equiaxed grains in cross section, which was theoretically analyzed. In addition, experimental results indicate that trace addition of inoculants to the melt neither introduces inclusions nor changes the phase constituent of the alloy. At the same pouring temperature, the amount of shrinkage porosity in specimens can be greatly decreased if inoculants are added into the melt.

SUPERALLOY IN718C,* with a combination of high *IN718C is a trademark of the Special Metals Corporation Group of Companies, Huntington, WV.

strength and good resistance to corrosion, oxidation, and creep within the intermediate temperature range, is one of the widely used superalloys in the world. It is often used for turbine disks and low-pressure turbine blades of aircraft engines, which work below the equal-strength temperature of the alloy. Therefore, uniform and fine-equiaxed grains are desirable to increase resistance to crack growth and fatigue properties. In previous studies, a great deal of work on grain refinement was devoted to controlling the casting parameters such as withdrawing the melt superheat and applying mechanical agitation in the mold. Some work has resulted in the development of useful grain refining processes, such as “Grainex” and “Microcast” by Howmet Corporation (Cleveland, OH).[1–5] Though they have been applied in industry production, they still have their own limitations. The chemical method through which grain refinement is realized by the addition of inoculants has the advantages of a simple operation, no change in experimental equipment, and a good refining effect. Thus, it is an effective way to refine grains. However, the previously used inoculants such as CoO,[6,7,8] WO3,[9] and B[10] have some disadvantages. For instance, CoO is only suitable for surface grain refinement, meaning that columnar grains will occur near the surface. Therefore, its effect is relatively weak for refining large-sized and thick-walled castings. 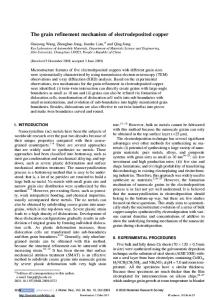 Effects of boron and zirconium additions on the fluidity, microstructure and mechanical properties of IN718C superalloy

The role of solute in grain refinement of magnesium