F. A. MODINE, D. LUBBEN, AND J. B. BATES Solid State Division, Oak Ridge National Laboratory, Oak Ridge, Tennessee 37831-6030 ABSTRACT Thin films of pure CaF2 and nanocomposite mixtures of A1203 with CaF 2 were sublimated on A12 0 3 substrates. Interdigital electrodes allowed in situ measurements of the electrical conduction of films as a function of thickness, deposition rate, composition, time, and temperature. The electrical conductivity in pure CaF2 adjacent to an A120 3 interface sometimes exceeded the bulk CaF2 conductivity (i.e., value at more than 50 nm distance) by as much as a factor of 6700 at 200'C. The high conductivity is characterized by an activation energy of 0.6 ± 0.1 eV, which is significantly lower than the activation energy of about 1.0 eV for conduction in the bulk. However, this high conductivity is thermally unstable and diminishes in time. A high but stable conductivity was obtained in CaF2 films containing about 10 mole percent A12 0 3 as a dispersed second phase. At 200'C, a 2-phase film gave a factor of 360 enhancement over the measured bulk CaF2 conductivity and a factor of 7 improvement over the best previously reported conductivity for CaF2-A120 3 composite materials. The origin of enhanced conduction in CaF2 is attributed to ion transport along dislocations. Dislocations anneal with a characteristic log of time dependence that is recognizable in the annealing behavior of the electrical conductivity. Presumably, the addition of a dispersed second phase of A12 0 3 to CaF2 serves both to generate and to pin dislocations; the electrical conductance is thereby enhanced and stabilized. INTRODUCTION Composite electrolytes are materials in which a dispersed second phase enhances ionic conductivity.1 The addition of a second phase is known as heterogeneous doping, and it can increase the conductivity of some materials by orders of magnitude. The origin of enhanced ionic conduction is not well understood, but an interfacial mechanism is implicated by the fact that the conductivity increases in direct proportion to the surface area of the dispersed phase. 2-4 A large conductivity enhancement can be obtained at a dispersed phase volume fraction of even a few percent; hence, simple percolative models are inadequate.1 Several explanations of the enhanced conduction have been proposed. 5 -190 0A space charge explanation 7 ,8 of enhanced conduction has been popular, but two recent studies ,1 of enhanced conduction in AgCl have implicated grain boundaries and dislocations. The electrical measurements of this work are made on CaF2 films and thin-film CaF 2-A1203 composites. Information is obtained about the enhanced conduction by making measurements 1 during film growth. Such measurements have led others to conflicting conclusions. 0.11 Enhanced conduction was attributed to an interfacial space-charge layer in LiI on A12 0 3 , but it was attributed to a network of grain boundaries and dislocations in AgCI on A12 0 3 . In studies of CaF2-A12 0 3 composites, enhanced conduction was attributed to inte 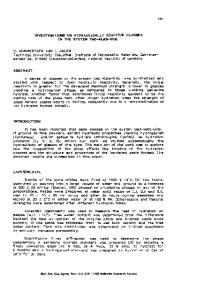