An instrumented indentation method is developed for generating maps of time-dependent viscoelastic and time-independent plastic properties of polymeric materials. The method is based on a pyramidal indentation model consisting of two quadratic viscoelastic Kelvin-like elements and a quadratic plastic element in series. Closed-form solutions for indentation displacement under constant load and constant loading-rate are developed and used to determine and validate material properties. Model parameters are determined by point measurements on common monolithic polymers. Mapping is demonstrated on an epoxy-ceramic interface and on two composite materials consisting of epoxy matrices containing multiwall carbon nanotubes. A fast viscoelastic deformation process in the epoxy was unaffected by the inclusion of the nanotubes, whereas a slow viscoelastic process was signiﬁcantly impeded, as was the plastic deformation. Mapping revealed considerable spatial heterogeneity in the slow viscoelastic and plastic responses in the composites, particularly in the material with a greater fraction of nanotubes.

pyramidal probes, such as the three-sided Berkovich diamond, usually generates all three of the viscouselastic-plastic (VEP) indentation deformations. Under these conditions, correspondence principles, which rely on material linearity in elastic and viscous constitutive behavior (Hookean and Newtonian, respectively), cannot be used as the plasticity renders the nonviscous component of the deformation nonlinear. Hence, although correspondence methods can incorporate the geometrical nonlinearity of spherical and pyramidal indentatio

A flexible model for instrumented indentation of viscoelastic-plastic materials 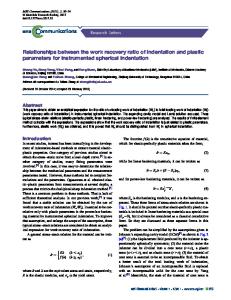 Viscoelastic Effects on the Scratch Resistance of Polymers: Relationship Between Mechanical Properties and Scratch Prope

Microindentation of titanium: Dependence of plastic energy on the indentation depth and time-dependent plastic deformati