The mechanical properties of thin films on substrates are described and studied. It is shown that very large stresses may be present in the thin films that comprise integrated circuits and magnetic disks and that these stresses can cause deformation and fracture to occur. It is argued that the approaches that have proven useful in the study of bulk structural materials can be used to understand the mechanical behavior of thin film materials. Understanding the mechanical properties of thin films on substrates requires an understanding of the stresses in thin film structures as well as a knowledge of the mechanisms by which thin films deform. The fundamentals of these processes are reviewed. For a crystalline film on a nondeformable substrate, a key problem involves the movement of dislocations in the film. An analysis of this problem provides insight into both the formation of misfit dislocations in epitaxial thin films and the high strengths of thin metal films on substrates. It is demonstrated that the kinetics of dislocation motion at high temperatures are especially important to the understanding of the formation of misfit dislocations in heteroepitaxial structures. The experimental study of mechanical properties of thin films requires the development and use of nontraditional mechanical testing techniques. Some of the techniques that have been developed recently are described. The measurement of substrate curvature by laser scanning is shown to be an effective way of measuring the biaxial stresses in thin films and studying the biaxial deformation properties at elevated temperatures. Submicron indentation testing techniques, which make use of the Nanoindenter, are also reviewed. The mechanical properties that can be studied using this instrument are described, including hardness, elastic modulus, and time-dependent deformation properties. Finally, a new testing technique involving the deflection of microbeam samples of thin film materials made by integrated circuit manufacturing methods is described. It is shown that both elastic and plastic properties of thin film materials can be measured using this technique. 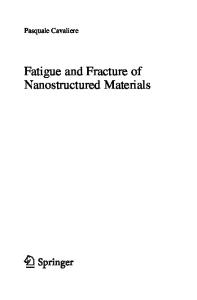 The Mechanical Properties of Thin Polymer Films from Nanoindentation