Mechanisms for Ce-induced remarkable improvement of conductivity in Al alloys

Effect of Ce addition on electric conductivity of Al alloys is investigated in this paper. Addition of proper amount of Ce leads to a remarkable improvement of electric conductivity. Adding Ce enhances the formation of binary, ternary, or quaternary compounds of Ce, Si, Fe, and Al and reduces the solution content of Fe and Si in the Al solution accordingly, well consistent with the Al lattice constant calculations and the Bragg models. Density of state adjacent to Fermi level of Al–Ce solution is obviously different from other solute atoms involving in La, Fe, and Si etc. and fairly similar with that of pure Al. Two possible contributions of Ce lead to the remarkable improvement of conductivity. First, Ce addition alleviates the lattice static distortion of Al solution and hence expands the average electrical free path. Second, Ce-induced alteration of electron energy band structure may intensify the effective electron number that participates conduction.

Aluminum and aluminum alloys have been widely used as electrical conductors in power lines and hybrid induction motor applications because of their high speciﬁc strength, good corrosion resistance and excellent electric conductivity.1,2 It is well known that addition of rare earth elements in aluminum alloys has a lot of beneﬁts, such as deoxidizing,3 dehydrogenizing4 and reﬁning grain sizes.5–9 This results in an improvement of castability10–12 and mechanical properties.13–15 Numerous studies have been conducted on the effect of rare earth (RE) on electric conductivity of aluminum alloys. However, there are contradictory results reported in the literature. Xu et al.16 reported that electric resistance of Al–0.97% Mg–0.54% Si alloy decreased with addition of Ce. Zhao et al.15 observed that addition of La in Al–0.5% Si–0.43% Mg alloy reﬁned the microstructure and also improved electric conductivity. Chen et al.17 investigated the effect of addition of Ce and Y in Al–Zr– Mg alloys and reported that addition of mischmetal improved the conductivity. But, Gao et al.18 reported no improvement of the conductivity with addition of Ce in commercially pure aluminum alloy (CP-Al). Wang et al.19 also pointed out that mischmetal addition has no effect on conductivity of CP-Al. The controversial results Contributing Editor: Jürgen Eckert a) Address all correspondence to this author. e-mail: [email protected] DOI: 10.1557/jmr.2016.477

indicate that there is a need to further study the effect of rare earth addition on conductivity in aluminum alloys. As RE elements have large radius and tend to lose two outmost level s-electrons and a 5d or 4f electron easily becoming trivalent ion, RE metals are very active.20 As a result, RE is prone to form intermetallic compounds with Fe and Si solutes in the Al alloys.21,22 For overhead wire conductors or conductive components in hybrid electric vehicle, to meet its strength r 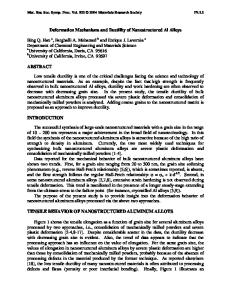 Kinetics of retrogression in Al-Zn-Mg-(Cu) alloys

The solubility of hydrogen in liquid binary Al-Li alloys A study of stress-corrosion in Al-Zn-Mg alloys