THE effects of load interactions on fatigue crack growth have been widely investigated during the past several decades. These effects and the responsible mechanisms must be well understood before accurate predictions of fatigue life can be made under variable amplitude loading conditions. The majority of these investigations have involved applying a single tensile overload of magnitude Ko~ to a specimen undergoing cycling at some baseline stress intensity factor range, AKB, and measuring the effect on crack growth rates. The crack growth rates are typically retarded for some increment of crack growth following the overload. The magnitude of this retardation is often measured in terms of the number of delay cycles, Na, and the increment of crack growth affected by the overload, aaff. The meaning of these parameters is illustrated schematically in Figure 1. Several investigators have observed in a number of ingot metallurgy (IM) aluminum alloys tl,2,31 and a titanium alloyt41 that the number of delay cycles, Nd, following a single tensile overload increases from a minimum at an intermediate baseline stress intensity factor range, AKA, with decreasing AK8 approaching threshold and increasing AKB approaching unstable fracture. This behavior results in a characteristic "U"-shaped curve, as shown in Figure 2, when the number of delay cycles for a given percentage overload is plotted as a function of AKB. There are currently two proposed models which attempt to explain the origin of the "U'-shaped curve. Venkateswara Rao and Ritchie t2J and Ward-Close and G.H. BRAY, Graduate Student, and E.A. STARKE, Jr., Earnest Oglesby Professor of Materials Science and Dean, School of Engineering and Applied Science, are with the University of Virginia, Charlottesville, VA 22903. A.P. REYNOLDS, Research Scientist, is with Analytical Services and Materials, Inc., NASA Langley Research Center, Hampton, VA 23665. Manuscript submitted February 24, 1992. METALLURGICAL TRANSACTIONS A Some Revisions of Fatigue Crack Growth Characteristics of Rubber 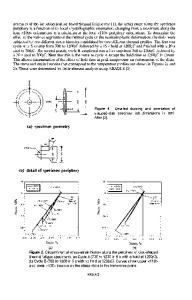 Effects of sic content on fatigue crack growth in

The early stage of fatigue crack propagation in al 2048