Three different types of HT-LiCoO2/lithium lanthanum titanate (LLT) assemblies were produced by depositing an HT-LiCoO2 cathode on polycrystalline LLT with various surface finishes, to investigate the effects of the HT-LiCoO2/LLT interface structure on the electrochemical properties of the assemblies. An amorphous layer is confirmed to be introduced by Ar ion irradiation to crystalline LLT. The HT-LiCoO2/LLT assembly composed of the ion-irradiated LLT exhibits good cycle stability and relatively low apparent interface resistivity. These results indicate that the introduction of an amorphous LLT layer by surface modification of crystalline LLT is very effective in improving the structural stability and lithium-ion conductivity of the interface between HT-LiCoO2 and crystalline LLT.

All-solid-state lithium secondary batteries have great advantages over currently-used lithium secondary batteries containing flammable liquid electrolyte in terms of safety, thermal stability, and resistance to shock and vibration.1–6 Because of such attractive properties, they have been considered as promising candidates for future application fields including large scale batteries used in electrical vehicle and power load leveling applications. In the case of the all-solid-state batteries, the interface structure between the electrode and solid electrolyte is considered to have a great influence on battery performance such as resistivity and mechanical stability of the interface between solid-electrode and solid-electrolyte upon charging and discharging. However, the relationship between the microstructures of the interface and electrochemical properties has not been investigated in detail. Recently, we have investigated the influence of the microstructure of the solid cathode/solid electrolyte interface on electrochemical properties using model a)

assemblies composed of a high-temperature modification of LiCoO2 (HT-LiCoO2) cathode with a layered rock-salt type rhombohedral structure and a perovskite-based lithium lanthanum titanate (LLT: La2/3–xLi3xTiO3) solid electrolyte.7,8 Our previous results suggest that the resistivity as well as the mechanical stability of the interface can be controlled mainly by two factors, namely the introduction of nanoscale defect regions such as amorphous LLT at the interface; and the geometrical configuration of Li layers in the crystal structure 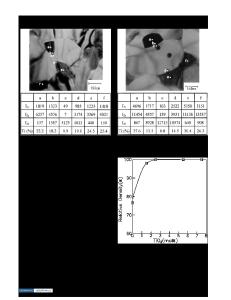 Mechanism of the interfacial reaction between cation-deficient La 0.56 Li 0.33 TiO 3 and metallic lithium at room temper 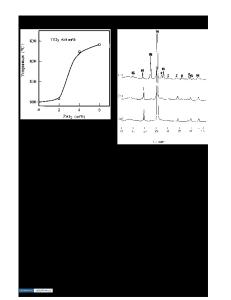