Nb polarization in ferroelectric perovskites KNbO3 and (PbZn1/3Nb2/3O3)0.88-(PbTiO3)0.12 E. Mamontov, W. Dmowski, and T. Egami Department of Materials Science and Engineering and Laboratory for Research on the Structure of Matter, University of Pennsylvania, Philadelphia, PA 19104-6272, U. S. A. ABSTRACT XANES measurements have demonstrated that Nb polarization in (PbZn1/3Nb2/3O3)0.88(PbTiO3)0.12 is small compared to that in KNbO3. This finding disproves the view of Nb5+ as invariably ferroelectrically active cation, and demonstrates that its polarizability depends on the Asite cations. Our results do not support conventional view of relaxor behavior in Pb(B’1/3Nb2/3)O3 ferroelectrics as a consequence of disruption of the connectivity of polarizable Nb5+ ions by their non-polarizable B’ counterparts. Instead, they speak in favor of scenario in which relaxor behavior is caused by randomness of the local direction of Pb polarization due to chemical disorder on the B-sites of the perovskite structure. INTRODUCTION The concept of ferroelectrically active cations plays a prominent role in the description of ferroelectricity. In the past, when the ferroelectricity in solids with perovskite structure ABO3 was understood in terms of purely ionic bonding, small B-cations were viewed as “rattling” within the oxygen octahedrons BO6 [1]. Although this simplistic idea was rejected in favor of more complex picture involving covalent bonding between the B-cation d states and O(2p) states [2], the ionic radius of the B-cation is still the important parameter relevant to the elastic energy associated with ferroelectric distortions. Despite the indication that B-O bonding is influenced by A-cations [2], their role is often overlooked, and small d0 cations such as W6+, Ti4+, Nb5+, and Zr4+ are widely considered invariably ferroelectrically active. Knowing the degree of Nb polarization is essential for understanding the ferroelectricity in technologically important relaxor ferroelectrics Pb(B’1/3Nb2/3)O3, which are characterized by a disorder in the B-cation sublattice occupied by ferroelectrically inactive cations B’ and presumably polarizable cations Nb5+. There are two possible scenarios on how the chemical disorder on the B-sites leads to the relaxor behavior of these compounds. In the first one, the Nb5+ are viewed as highly polarizable ions and the principal contributors to the overall ferroelectric polarization. The 1:1 local ferroelectric ordering is incompatible with the global 1:2 stoichiometry of B-cations, leading to a frustrated state with only a short-range order. In the second scenario, the ferroelectric polarization is mostly due to Pb2+. Chemical disorder on the B-sites affects the polarization of Pb ions, making the direction of local Pb2+ polarization random. The first scenario is generally accepted, partially because the Nb5+ ions are known to be strongly polarizable in some conventional ferroelectrics. For instance, high polarizability of Nb is associated with a high Curie temperature of 708 K in strongly ferroelec 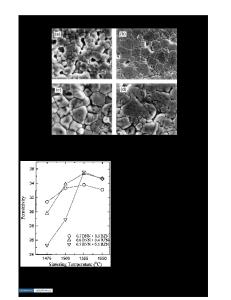