Abstract The potential soil loss of the Haora River basin has been calculated by using four physical parameters in Revised Universal Soil Loss Equation (RUSLE) method, i.e. (i) rainfall erosivity, (ii) soil erodibility, (iii) slope length and (iv) slope steepness. The minimum potential loss is found in the plain areas and also along the river course (0–3000 tons.ha−1.year−1). The maximum amount of potential soil loss is found in the steep slope area where the rate is more than 9000 tons.he−1.year−1. Actual soil loss of the Haora River basin has been estimated by multiplying the land cover–land use and adopted conservational practice map with potential soil loss map. More than 250 km2 area of the basin is having very less amount of soil loss (1500 tons.ha−1.year−1) and can produce soil maximum of 120,000 tons.year−1. The rate of sediment yield has been estimated from the sediment delivery ratio (SDR) method. From this method, the maximum amount of sedimentation is found along the river courses (>4500 tons.ha−1.year−1), but in the steep hilly areas the sedimentation rate is approximately zero. The trend of estimated sediment yield is quite matching with the field generated data. From their comparative graph, it is found that the difference is positive in the years 1991, 1993, 2003 and 2007 which are well marked as flood year. In the rest of the years, the difference between observed and estimated sediment seemed to be negative. Keywords Soil loss • RUSLE • Sedimentation • Sediment yield

Soil erosion is a complex dynamic process by which surface soils are detached, transported and accumulated in a distant place resulting in exposure of subsurface soil and sedimentation in reservoir. Accelerated soil erosion has adverse economic and environmental impacts (Lal 1998). Many other problems are created by soil erosion like deposition of unfertile material on cultivated lands, harmful effects on

8 Soil Loss and Sediment Yield of the Haora River Basin

water supply, fishing, sedimentation of canals and rivers and most importantly the destruction of fertile agricultural land. Soil degradation by accelerated water- and wind-induced erosion is a serious problem in the twenty-first century. Erosion is a natural geomorphic process occurring continually over the earth’s surface. However, the acceleration of this process through anthropogenic perturbations can have severe impact on environmental quality. This kind of impact is quicker to appear and more pronounced in tropical and subtropical countries like India. It is due to the interactions of soil characteristics and climate with agricultural practices and the transformation of forests into cultivated land as a result of anthropogenic influence (Morales et al. 2003). According to a study conducted by

Hydrological Processes of the Danube River Basin Perspectives from t

Social and Environmental Vulnerability in a River Basin of Mexico

Wave-Forced Sediment Erosion and Resuspension in the Yellow River Delta 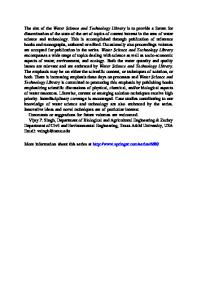