Abstract We present the results of an investigation of the microstructural properties of layered-structure perovskite SrBi 2Ta 2O 9 films grown by Flash-MOCVD, conventional CVD, and MOD. The films grown by Flash-MOCVD on Pt electrode layers, were polycrystalline and showed acceptable ferroelectric properties and low leakage. TEM showed that the individual crystallites were of high quality and, on average about 300nm in diameter. TEM also gave some indications of a disordered phase interspersed amongst the crystallites. A complete, high-resolution set of XPS spectra gathered from these films confirmed that the basic perovskite structures were predominately single phased but that they were, in all cases, accompanied by a significant amount of mobil clusters of Bi metal. We speculate that this Bi metal corresponds to the disordered phase seen by TEM and show that appropriate ozone annealing is able to remove all evidence of it. Introduction Currently a number of research groups worldwide are evaluating the layered structure perovskite, SrBi 2Ta 2O 9 (SBT) as a candidate for application to ferroelectric memories.1' 2 In developing the film growth technology for this material, proper microstructural characterization is essential. Most commonly X-ray diffraction together with electron microscopy and a semi-quantitative atomic composition probe such as EPMA or X-ray fluorescence has been applied to this end. X-ray diffraction however is not very sensitive and cannot detect highly disordered constituents while EPMA and X-ray fluorescence with their extremely poor spectral resolution are unable to distinguish between chemical phases. Ideally a probe sensitive to both bond structure and atomic concentration should be applied to the analysis of films as complex as SBT. One of the strongest candidates for this task is X-ray photoelectron spectroscopy (XPS).3 The analysis described here utilizes a combination of XPS and transmission electron microscopy (TEM) to investigate some of the microstructural properties of SBT films grown by various methods including MOD, MOCVD and Flash-MOCVD. Although these poly-crystalline films are predominately composed of the primary SBT layered-structure, they do exhibit XPS signatures of residual chemical phases. Most of these residuals have core-level binding energies which are near the main SBT values and are therefore not well resolved in the data however one particularly well separated XPS peak which appears is that of pure Bismuth metal. It is this metallic component that forms the primary subject to be discussed here. Experimental Details of the Flash-MOCVD process used to produce these samples are available elsewhere in these proceedings. 4 The conventional MOCVD utilized Ta(OC 2H5 )5, Sr(Thd) 2Tetraene, and 201

Bi(O-tolyl) 3 as precursors; a pressure of 5-10 Torr; and a substrate temperature of 600°C-700°C. The MOD deposition was carried out in the usual way. In all cases, Bi was delivered in excess relative to the o 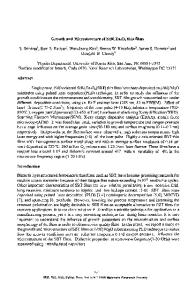