Thermodynamic assessment of the CaO-MgO-SiO 2 system

THE CaO-MgO-SiO2 system is an important system to metallurgy and geochemistry. The phase equilibria and thermodynamics of the system have been widely studied both experimentally and theoretically. The purpose of the present study was to obtain a self-consistent description of the thermodynamic properties of the whole system by assessing all the phase equilibrium and thermodynamic information available for the system at 1 atm. This was realized by using thermodynamic models and computerized optimization of the selected experimental information by using the so-called calculation of phase diagram (CALPHAD) method, which has its origin in pioneering work by Kaufman and BernsteinY] The CALPHAD approach is a way of coupling different types of information (various thermochemical data as well as information on phase equilibria) that are otherwise not easy to compare. The result of a CALPHAD assessment is thus a complete thermodynamic description of all the phases of a system. Using this description, all kinds of possible diagrams can be calculated, e.g., equilibrium diagrams, metastable diagrams, and driving forces for kinetic calculations. There is worldwide activity on the thermodynamic assessment and modeling of oxide melts. Many different models have been tried with varying degrees of success. The two-sublattice model for ionic liquidt2~has been used for several years at our department. The reason for using a sublattice model is the ionic nature of oxide melts in which ions of different charges are present. Some variations in fine details of the model and its advantages as compared with other models were recently discussed by Hallstedt et aL t31 Most of the solid phases in the present system may be characterized as ionic compounds, in which oxygen is the anion and the metals form the cations. It was recently[41 described how the compound energy model tSl can be applied

to solid solution phases in oxide systems, and it was used in the present work. There has been some previous, similar work, but it was limited to the MgSiO3-CaMgSi206 join and did not include the liquid.t6.7] This work was based on recent assessments of the CaOMgO, tSj CaO-SiO2, [9,1~ and MgO-SiO2 [lq binary systems. However, the descriptions of CaO-SiO2 and MgO-SiO2 were adjusted in the present work based on the ternary information. The present article is organized as follows. In Section II, the available experimental information is reviewed; in Section III, the thermodynamic models for the Gibbs energy of the various phases of the system are presented; and in Section IV, the model parameter evaluations are described, and calculat Thermodynamic assessment of the Al-Fe-Si system 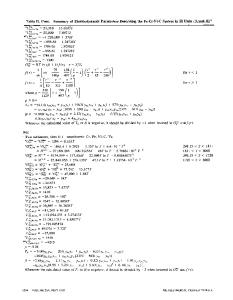 A thermodynamic assessment of the Fe-Cr-Ni-C system 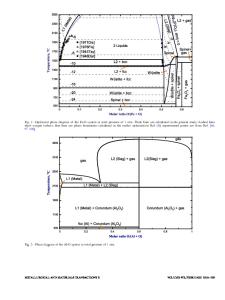 Critical Assessment and Thermodynamic Modeling of the Al-Fe-O System The thermodynamic activity of PbO in liquid PbO-PbCI 2 system

Vapor pressure and thermodynamic study of the Co-Ni system

Phase diagram and thermodynamic properties of the yttrium-zinc system

Thermodynamic modeling of the nickel-lead-tin system Thermodynamic Modeling of the Cr-Fe-S System