A-Site Distribution in La1-xSrxMnO3: a Computational Study Yun Hee Jang1,2, François Gervais1, and Yves Lansac*,1 1 LEMA, Department of Physics, Université François Rabelais, Parc de Grandmont, Tours, 37200, France 2 Department of Materials Science and Engineering, Gwangju Institute of Science and Technology, Gwangju, 500-712, Korea, Republic of ABSTRACT The possibility of an A-site (La3+/Sr2+) ordering in a colossal magnetoresistance manganite La3/4Sr1/4MnO3 was explored using molecular dynamics (MD) simulations with a newly developed force field and quantum mechanics (QM) calculations on the structures obtained from MD. The calculated degrees of stabilization (enthalpy gain) of various patterns of A-site ordering are not significant enough to overcome the accompanying entropy loss, supporting the random A-site distribution in La3/4Sr1/4MnO3. This approach combining MD and QM as well as the versatile force field developed in this study should be useful to investigate the structures and functions of magnetic tunnel junction devices involving mixed-valence manganites. INTRODUCTION Since the discovery of colossal magnetoresistance (CMR),[1] mixed-valence manganites with a perovskite structure (R1-xAxMnO3; R = La, Pr, Nd; A = Ca, Sr, Ba, Pb)[2] have attracted a great attention due to their potential in spintronics applications.[3] A relationship between CMR and charge-ordering phase transition has been suggested,[4] and a great amount of discussion has been made on the charge ordering[5] and the charge-ordered phases[6] in manganites. Most of the discussion, however, has been focused on the B-site charge-ordering (Mn3+/Mn4+). The Asite distribution (R3+/A2+) has been assumed to be random. This assumption, however, was questioned in several recent experiments.[7] Therefore, in this study we explored the possibility of an A-site ordering in a CMR manganite La3/4Sr1/4MnO3. Relative stabilities of various A-site distributions were estimated with quantum mechanics (QM) calculations. There have been quite a few QM studies on La1−xSrxMnO3,[8] but most of them assumed a cubic or pseudo-cubic perovskite structure with linear Mn−O−Mn bonds, ignoring a distortion such as an octahedral tilting. In the current work we first carried out a series of molecular dynamics (MD) simulations on various sizes of unit cells at each A-site distribution to find the smallest unit cell which can represent the distorted structure. Then the unit cell structure was exported as an input to the QM total-energy calculation. The MD simulations were also used to pre-select a small number of candidates for the most probable A-site distributions to be studied with the QM calculations. For this purpose, we derived a new force field (a set of functions and parameters to describe the inter-atomic interaction potential) which can reproduce energetic as well as structural properties of La3/4Sr1/4MnO3. We developed a two-body, non-shell-model force field as a simple and versatile force field which can be used in modeling composite systems such as th 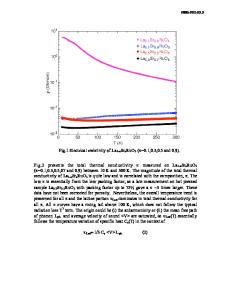