AL6061 alloy, a precipitation hardening aluminum alloy containing magnesium and silicon as major elements, oﬀers a wide range of engineering applications due to its high strength-to-weight ratio.[1] However, it often suﬀers from severe surface damage in some abrasive conditions. There are some techniques to improve the tribological properties of aluminum alloys such as grain reﬁnement,[2] alloying elements addition,[3] and surface treatments.[4] Surface treatments and especially fabricating surface composites have attracted considerable interest over recent years. There are various techniques such as laser melt treatment,[5] electron beam melting,[6] and plasma spraying[7] to fabricate surface metal matrix composites (SMMC). It should be noted that all these methods are classiﬁed into liquid phase processing and are performed at elevated temperatures. Therefore, it is diﬃcult to avoid the interfacial reactions between reinforcement and metal matrix, and formation of some undesirable phases as a result. Obviously, the aforementioned problems can be resolved by processing at temperatures below the melting point of the substrate.[8] In the last decades, FSP, a solid-state technique derived from friction stir welding (FSW), has attracted much attention for surface

METALLURGICAL AND MATERIALS TRANSACTIONS A

modiﬁcation.[9] During FSP, a rotating tool is forced into a workpiece and travels across a desired line for microstructural modiﬁcation. Friction between the tool and the workpiece heats the surrounding material, severely plasticizing and softening it. During this process, extensive grain reﬁnement to about 25 to 100 nm in size[10] and fabrication of surface composites via mixing other elements or second phases into the stirred alloys[8,11–13] are accessible. Mishra et al.[8] produced Al-SiC surface composite by applying a mixture of SiC powder and methanol to the surface of Al plates and performing FSP. Because of non-homogeneity and thickness limitation of preplaced layer, this technique has not received much interest. Morisada and coworkers[11] managed to overcome the above downsides by creating a groove along the FSP direction, which was ﬁlled with reinforcement particles. However, agglomeration of the reinforced particles was a limitation of this technique. In recent years, a new eﬀective technique including thermal spraying of reinforcement particles on the substrate surface before applying FSP[14] was introduced in order to overcome the mentioned drawbacks. In this study, the latter technique was employed because of its unique advantages including uniformity, no limitation in amounts of reinforcements, and ability to fabricate in situ composites. In comparison to composites produced by ex situ methods, in situ composites have more homogeneous microstructures and ar 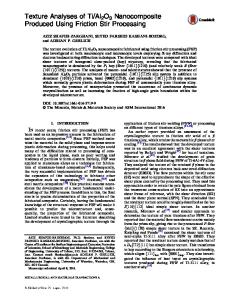 Restoration Mechanisms During the Friction Stir Processing of Aluminum Alloys