Recently, the reduction the weight of cars has become strongly desired as an energy-saving measure. From this viewpoint, magnesium is a promising candidate because it is the lightest among the practical metals, and it has rich natural resources. However, there are various problems in the commercialization of magnesium alloys, in that magnesium is difficult to handle due to the high activity in the liquid state and it has somewhat poor strength. To prevent the oxidization and combustion of magnesium melt, semi-solid processing methods such as rheocasting1 and the thixomolding method,2–4 have been developed. Use of the semi-solid state means that the operating temperature can be lowered, and the danger of the combustion is reduced due to the decrement of the liquid fraction. In addition, the viscosity of the semi-solid state is sufficiently high compared with that of the liquid state

that the filling to a mold, such as in the die-casting process, is improved and the number of inner defects is remarkably decreased. Thus, semi-solid processing is better suited for the production of magnesium alloy components. The strengthening of magnesium alloys is necessary for the expansion of their fields of application. The mechanical properties of metallic materials are closely related to their microstructures, and thus, refinement of the microstructure leads to i 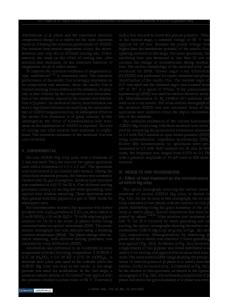