Abstract—Cs3(HSO4)2(H2PO4) single crystals, obtained for the first time based on a systematic study of the phase diagram of the CsH2PO4–CsHSO4–H2O ternary system, have been studied by X-ray diffraction. The atomic structure of the crystals at room temperature is determined, and their structural features are analyzed. DOI: 10.1134/S1063774515040148

INTRODUCTION The effect of anomalously high proton conductivity was revealed for the first time when studying the proton transport processes in CsHSO4 and CsHSeO4 crystals at the Institute of Crystallography, Russian Academy of Sciences [1]. By analogy with “superionic conductors,” these crystals were referred to as “superprotonics.” A large amount of data on the nature of superprotonic conductivity in hydrogen-containing salts, as well as their structure and properties, have been accumulated to date due to the studies carried out in Russia [1–6]. These investigations made a decisive contribution to the establishment of the structural mechanism of proton transport in superprotonic crystals and became a basis for their practical applications in various electrochemical devices (including fuel cells), as was acknowledged abroad. MmHn(XO4)(m + n)/2 ⋅ yН2О (М = K, Rb, Cs, NH4; X = S, Se, P, As) superprotonic crystals have been actively studied in order to establish the influence of the hydrogen subsystem on the physicochemical properties of these materials (a fundamental problem of modern condensed-matter physics) and to solve the problem of stabilizing superprotonic phases. In contrast to other hydrogen-containing compounds, phase transitions in superprotonic crystals at elevated temperatures change the system of hydrogen bonds, thus radically changing the physical and physicochemical properties. In particular, anomalously high proton conductivity arises, the value of which is close to the conductivity of melts of these salts: 10–3–10–1 Ω–1 cm–1; note that the properties change at relatively low temperatures: ~400 K. It should be emphasized that superprotonic conductivity is related to the structural features of these compounds rather than to the presence of dopants. The data on the structure of crystals of the

MmHn(XO4)(m + n)/2 ⋅ yН2О family are indicative of the possible existence of different structural mechanisms of changes in their physical properties. For example, the occurrence of anomalously high superprotonic conductivity in M3H(XO4)2 is related to the formation of a radically new, dynamically disordered system of hydrogen bonds. The formation of this system was revealed for the first time when studying the structural phase transitions in Rb3H(SeO4)2 crystals [2, 7]; later on it was confirmed for other M 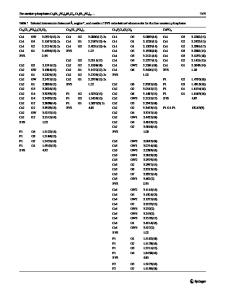 Synthesis and Molecular Structure of 2-(4-Chlorophenyl)-3-(phenyl-amino)-5-(thiophen-2-ylmethylidene)-3,5-dihydro-4 H -i