INTRODUCTION In MEMS(Micro Electro Mechanical Systems) field, thin films have been widely used as a structural material of microsensors and microactuators. Mechanical properties of thin films have been very important parameters because these properties often determine the performance, lifetime, reliability and stability of fabricated MEMS devices. Many attempts have been made to determine these mechanical properties accurately[I-3]. Especially, recent advances in MEMS technology made it possible to measure the mechanical properties on the microscale. Resonance method is one of the easiest ways to measure the mechanical properties of thin films, because of its simplicity and well-defined analysis theory[4,5]. With the advance of UV-LIGA process, electroplating is a well-known process in MEMS fabrication due to its ability to make thick metallic structures and process simplicity. Many materials like nickel, copper and gold are used in MEMS field. From these, gold is an attractive material in RF MEMS field, because its high conductivity and ability to make a thick structure help to reduce the signal loss of RF devices such as tunable filter with variable capacitor of cantilever actuator[6] and transmission lines. In our work, mechanical properties of electroplated gold were measured using these resonance techniques.

where L and h are respectively the length and the thickness of cantilever beam, E' is effective Young's modulus and p is the density of the material. Effective modulus E' should be replaced by E/(1-v 2), where v is Poisson's ratio, if the width of the beam b is relatively large compared with its thickness h (b>5h), accounting for the suppression of the in-plane dilation accompanying axial strain[7]. If we know the dimensions of cantilever and the density of material, and also measure the resonance frequency, Young's modulus E can be calculated. For a bridge structure, effects of axial force caused by residual stress in the film must be considered. In the case of cantilever, internal stress in the 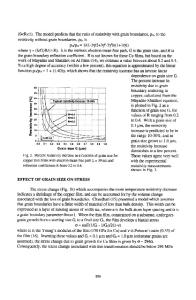