Microstructures in Cold-Rolled Ni3Al Single Crystals Kyosuke Kishida, Masahiko Demura, and Toshiyuki Hirano Materials Engineering Laboratory, National Institute for Materials Science, 1-2-1 Sengen, Tsukuba, Ibaraki 305-0047, JAPAN ABSTRACT Microstructure evolution during cold rolling of binary stoichiometric Ni3Al single crystals was examined by the optical (OM) and transmission electron microscopy (TEM). In the case of the initial RD, the banded structure is formed. Inside each matrix band, the localized shear deformations occur alternately on two {111} planes. In addition, huge amounts of widely extended superlattice intrinsic stacking faults (SISFs) are observed from relatively early stage of cold rolling. The occurrence of the localized shear deformation is considered to be controlled by the SISFs since they must be strong obstacles for the dislocation motion on the other glide plane. The extensive formation of the SISFs is therefore considered to be one of the most important microstructural features which control the cold rolling behavior of Ni3Al. INTRODUCTION Considerable amount of studies on the deformation microstructures in Ni3Al-base intermetallic alloys have been carried out so far, however, main interests were the dislocation structures near the yield point mainly because the anomalous yield behavior is one of the most attractive properties of Ni3Al [1,2]. In contrast, the deformation microstructures after large plastic deformation such as cold rolling have rarely been studied by transmission electron microscopy (TEM) [3,4]. Recently we have carried out systematical studies on cold rolling of binary stoichiometric Ni3Al single crystals with various initial crystal orientations and revealed that the cold rolling behaviors are strongly dependent on the initial crystal orientations, especially on the initial rolling direction (RD) [5]. Very thin cold-rolled foils (approximately 20µm in thickness) with good quality in shape can be obtained only when the initial RD is close to , whereas macroscopic curving or cracking hinders high cold reduction for samples with the other initial RD [5,6]. Such an anisotropic rolling behavior must be closely related to the internal deformation microstructure developed during cold rolling. It is therefore necessary to investigate the characteristics of the microstructures in the cold rolled thin foils for understanding the details of the texture formation mechanisms. In the present study, we report the results of the TEM observations of cold-rolled Ni3Al single crystals. EXPERIMENTAL PROCEDURES Single crystalline rods of binary stoichiometric Ni3 Al were grown by optical floating zone methods [7]. The sample (#47-1) used in this study possessed approximate initial orientations of (530)[001] [5]. All cold rolling processes were performed at room temperature without intermediate annealing. Details of the cold rolling were described in our previous papers [7].

Microstructures of the samples were characterized by optical microscopy (OM) and TEM. For OM observa

The orientation and temperature dependence of the yield stress of Ni 3 (Al, Nb) single crystals 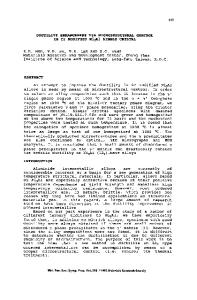 Photoelectrochemical cells based on In 2 S 3 single crystals

The Location of Tantalum Atoms in Ni 3 Al