“Nanostructured” germanium (Ge; also known as “voided,” “porous,” “nanoporous,” “cratered,” and “honeycomb” Ge) created via ion beam modiﬁcation has been studied for many years. This work reviews the progress made in studying and characterizing the nanostructured morphology, particularly via the use of experimental techniques such as scanning electron microscopy, atomic force microscopy, and transmission electron microscopy. Speciﬁcally, the empirical observations of the structural evolution of Ge as a function of ion beam modiﬁcation conditions are discussed with added emphasis placed on quantiﬁcation of the microstructure. The experimental observations and microstructure quantiﬁcation are further discussed in terms of the implications for proposed formation mechanisms of the nanostructured morphology. Potential uses of the nanostructured morphology in chemical sensor and energy storage applications and suggested future lines of research to further the fundamental understanding of nanostructuring in Ge using ion beam modiﬁcation are also presented.

So-called “nanostructured” materials, which have characteristic feature sizes of the order of a few to tens of nm, are attractive in a wide range of applications including energy storage,2–5 thermoelectrics,6 photovoltaics,7 chemical sensors,8–10 photodetectors,11 drug delivery,12 and structural applications13 and can be produced via a variety of methods including chemical/physical vapor deposition,1 micromachining,12 and electrochemical cycling.14 One of the more interesting methods of nanostructuring is via the use of ion beam modiﬁcation (interchangeably referred to as ion-implantation). In particular, for the case of a few different types of semiconducting materials, ion beam modiﬁcation under appropriate conditions is known to result in complete structural decomposition of a material with no or very little initial porosity to a porous microstructure consisting of a nanoscale interdigitated network of strands. This process is known to occur for several different semiconductors, and was ﬁrst demonstrated for the case of compound semiconductors such as indium antimonide (InSb), gallium antimonide (GaSb), and gallium nitride (GaN).15–19 However, It was not until the early 1980s that it was discovered that the elemental semiconductor Ge also experiences a similar phenomenon,20–23 which has to date been most extensively studied as compared with any other materials that exhibit similar behavior. Nanostructuring of Ge using ion beam modiﬁcation will be the subject of this review, but it should be noted that many, 1

if not all, considerations discussed here in the context of Ge may not be applicabl 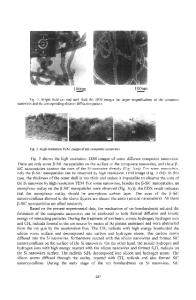 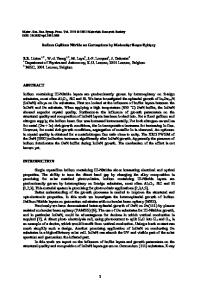