Novel Solid Nano Diamond/Pyrocarbon Semiconductor Materials Sergey K. Gordeev*, Peter I. Belobrov†, Nikolay I. Kiselev†, Eleonora A. Petrakovskaya†, Thommy C. Ekstrom‡ *Central Research Institute for Materials, St. Petersburg, RUSSIA † Kirensky Institute of Physics & Institute of Biophysics SB RAS, Krasnoyarsk, RUSSIA ‡ Skeleton Technologies Group, Stockholm, SWEDEN ABSTRACT Porous solids made of nano diamonds cemented by pyrocarbon show a semiconductor behavior where the properties are controlled by the factor γ = mass ratio of sp2/sp3 phases. The volume electrical conductivity σ (T) was measured in the temperature range 77 - 290 K as a function of γ. By controlling the ratio γ from 0 to 50 %, the electrical conductivity will change by 12 orders of magnitude. The semiconductor activation energy depends on γ-ratio and has values between 0.03 - 0.3 eV. The variable-range hopping conduction was checked by measuring σ against T and to look for a T1/4 dependence. A positive thermoelectric power showed that NDC was p-semiconductor with a narrow band gap. The paramagnetic nanodiamonds, g = 2.0027(1) and ∆H = 0.86(2) mT, will still have this property in the NDC material and both the g-value and line width are not dependent on γ-ratio and temperature. The concentration of unpaired electrons is 4*1019 spin/g that equals to one dangling bond per nanodiamond particle. Absences of magnetoresistance and Hall potential were observed for all NDC materials. This was interpreted as resulting from a Tamm - Lifshitz - Pekar electronic conduction mechanism within onedimensional band of surface states.

INTRODUCTION Diamond nano crystals are synthesized by an explosion method [1, 2]. It is well known that single and micro crystals of diamond are not thermodynamic stable in ambient conditions, whereas nanodiamonds surprisingly are more stable than graphite [3, 4]. This was used for making novel porous carbon nano composites [5, 6]. These nano diamond/pyrocarbon composites (NDC), made from nanodiamond bound by pyrocarbon, can be prepared as solid bulk materials and not only as films. Tamm introduced surface electronic states into physics [7]. Developing this idea Lifshitz and Pekar have constructed a qualitative physical pattern by introducing one-dimensional bands of electron surface states, relating them with charge and spin carrier transfer on the edges of small micro crystals [8]. At the time the idea was proposed there were no adequate materials to verify the phenomenon. Our aim was to characterize the new class of porous NDC materials prepared as a series with controlled compositions. Experimental data are presented below and discussed. The unusual semiconductor properties observed show that NDC represents a new family of modern carbon materials predicted earlier in theory only [8]. The physical properties are defined by the considerable contribution of quantum size effects. The various NDC materials are interesting

Nano-agriculture: A Novel Approach in Agriculture

Plenary Speaker Gargini to Address Materials and the Semiconductor Industry 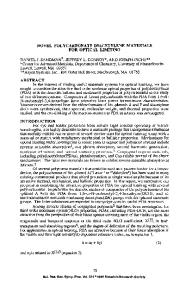 Laser-Solid Interaction and Dynamics of the Laser-Ablated Materials