ment by addition of elements to Al-Si alloys is an industrial practice designed to control the microstructure and consequently enhances the mechanical properties of these alloys, which are controlled by the eﬀect of additives such as Al grain reﬁners and silicon modifying elements.[1] Al-Si castings constitute 85 to 90 pct of the total aluminum cast parts produced and are widely applied in the automotive and aerospace industries. The amount of bismuth (Bi) is expected to increase in aluminum industries because of recycling in view of its use as an alloying element in special applications, such as those for aiming at increasing machinability, promoting chip breaking, and helping tool lubrication.[2] Bi is also added to Al-Mg alloys to prevent embrittlement by sodium[3] and disrupts the formation of oxide defects in aluminium alloys.[4] In addition, it has been reported that Bi addition counteracts the modifying eﬀect of Sr[5–7] in 319 cast alloy. However, the eﬀect of Bi addition and the exact mechanism responsible for transforming the silicon structure has yet to be investigated in details. Hence, the current paper is an attempt to explore the role of Bi in reﬁning the eutectic Si in Al-Si-Cu-Zn near eutectic alloy and provide an understanding to the possible mechanism responsible for this reﬁnement eﬀect. SAEED FARAHANY, Postdoctoral Fellow, ALI OURDJINI and MOHD HASBULLAH IDRIS, Professors, and TUTY ASMA ABU BAKAR, Senior Lecturer, are with the Materials, Manufacturing and Industrial Engineering, Faculty of Mechanical Engineering, Universiti Teknologi Malaysia (UTM), 81310 Johor Baharu, Malaysia. Conact e-mail: [email protected], [email protected] Manuscript submitted July 7, 2013. Article published online January 6, 2014 METALLURGICAL AND MATERIALS TRANSACTIONS A

Alloy (Al-11.7Si-1.8Cu-0.8Zn wt pct) was cut into small pieces, dried, and melted in a 2-kg capacity silicon carbide crucible by using an electric resistance furnace. A weighted pure Bi (99.99 wt pct) in the form of metallic shots was dried in an oven at 573 K (300 C) and then wrapped in aluminium foil and introduced into the molten base alloy to ensure that the Bi level in the melt reached about 1 wt pct. After being held for 15 minutes for dissolution and complete homogenization, the molten alloy was stirred, skimmed, and then poured at 1003 K ± 5 K (730 C ± 5 C) into a preheated single ceramic mold (inner diameter 40 mm, height 40 mm) for thermal analysis. The thermal analysis was performed by embedding a K-type thermocouple in the center, 20 mm above the bottom of the mold. The thermocouple was calibrated before each test. The temperature–time data were recorded using a highspeed data acquisition system connected to a computer with DEWESoft 7.5. FlexPro8.0.31 data analysis software was used for smoothing the curves and plotting the cooling curve, ﬁrst and second derivative curves for analyzing the recorded data. Samples for metallography were prepared by standard grinding procedures. The ground specimens were then subjected to a ﬁnal polis Grain refinement of superalloy IN718C by the addition of inoculants

Formation of carbonitride precipitates in hardfacing alloy with niobium addition

Effects of silicon addition on the first stage of 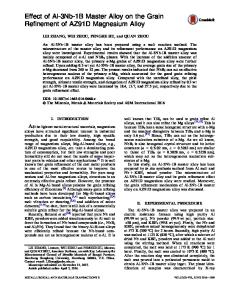 Experimental Study on the Mechanism of Carbon Diffusion in Silicon

On the mechanism of fatigue crack growth in silicon nitride