Prior to the advent of the lateral growth techniques, heteroepitaxial gallium nitride films 9 2

compromised the properties of subsequently fabricated devices. New growth techniques leading to low defect-density nitride films were required to achieve commercialization of viable optoelectronic and microelectronic devices. The advancement of lateral epitaxial overgrowth (LEO) as a technique capable of producing GaN epilayers with defect densities reduced to 105/cm 2 has recently been demonstrated by several research groups."12' 3' 4 The significance of lateral overgrowth was

immediate as Nichia Chemical reported in 1997 that use of LEO aided in increasing the lifetime of their blue laser diode from a few hundred hours to over 10,000 hrs,5 and then subsequently introduced the first commercially available GaN blue laser diode.6 However, to benefit from this reduction in defects, the placement of devices incorporating LEO technology is confined to regions on the final GaN device layer that are located over the masked regions and not over the window regions of the GaN seed layer. Figure 1 shows a scanning electron microscopy (SEM) cross-sectional image of GaN grown using the LEO technique.

The authors are currently investigating another lateral growth technique for GaN, namely, pendeo-epitaxy, 7',89,10,11 as a process route to resolve the aforementioned alignment problem.

Pendeo-epitaxy (from the Latin: pendeo-to hang, or to be suspended) incorporates mechanisms of growth used by the conventional LEO process by using masks to prevent vertical propagation of threading defects, and extends the phenomenon to employ the substrate as a pseudo-mask. Pendeo-epitaxy (PE) differs from conventional LEO in that growth does not initiate through 307

open windows but begins on sidewalls etched into the GaN seed layer. As the lateral growth from the sidewalls continues, vertical growth of GaN begins and results in the eventual lateral overgrowth of the masked seed form. Pendeo-epitaxial growth ultimately results in coalescence over and between seed forms, producing a continuous layer of GaN, as shown in Figure 2.

Although both LEO and PE research have led to low defect-density GaN material on two-inch SiC and sapphire substrates, the use of this substrate does not resolve the problem of achieving low-cost, large area GaN films necessary for commercialization of microelectronic devices. Meeting this objective has renewed interest in using Si( 11) substrates as an alternative to SiC and sapphire. Several recent demonstrations of lateral growth process routes achieving growth of (0001)GaN on (11 )Si have been reported. 8"•" 3 In this paper we report on the process steps for and characterization of PE GaN epilayers 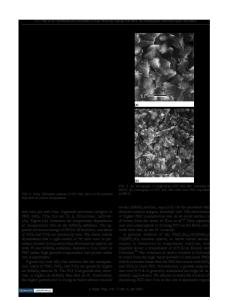