Results of a study of compositional, optical, electrical, and structural properties of hydrogen amorphous silicon carbide (a-SiC:H) prepared, respectively, by glow-discharge (GD) and reactive sputtering (SP) techniques at power densities varying between 1.25 • 10~2 and 1.25 • 10"1 W • cm"2 for GD samples are presented. Measurements are reported on the composition, optical and IR spectroscopy, and on the temperature dependence of electrical conductivity. All experimental observations suggest that the power density only slightly affects the physical properties of GD silicon-rich samples, whereas those of the carbon-rich SP samples depend more strongly on this deposition parameter. Finally, it is shown that the GD technique can provide films with better characteristics, whereas samples of similar composition prepared by sputtering have higher compositional disorder and are more inhomogeneous.

Hydrogenated amorphous silicon carbon alloys (a-SiC:H) are of considerable interest for application in multijunction thin-film solar cells1 and in large area white luminescent devices.2 These alloys can be prepared by Plasma Enhanced Chemical Vapor Deposition (PECVD), also known as glow-discharge (GD), or by reactive sputtering (SP).3~5 In the GD technique, a mixture of silane and a hydrocarbon gas such as methane, ethylene, or tetramethylsilane gases is used; good quality material with a low density of states can be achieved in a SiH4 + CH4 gas mixture. Sputtered a-SiC:H samples were found to have electronic properties inferior to those produced by the GD technique.6 However, material properties can be controlled better by adjusting deposition parameters in sputtering than in glow-discharge. Among the various preparation parameters, such as gas pressure, substrate temperature, system geometry, etc., the power density can be considered an important parameter since generally the power regime is different between the GD and the SP techniques. It has been shown3'7 that it is possible in the low power regime to separate, in the GD technique, the chemistry of the plasma and that of deposition and prepare a-SiC:H films with low densities of states from SiH4 + CH4 mixtures. This paper presents a study of a-SiC:H samples of similar composition deposited by the GD technique in SiH4 + CH4 gas mixtures and by the SP technique of a silicon target in Ar + CH4 gas mixture, respectively, varying the power density. The J. Mater. Res., Vol. 5, No. 12, Dec 1990

results obtained on the two sets of samples were compared in order to understand the influence of the power density on film properties. II. EXPERIMENTAL

Two sets of samples were deposited, respectively, by glow-discharge decomposition of SiH4 + CH4 and by sputtering. The deposition paramet 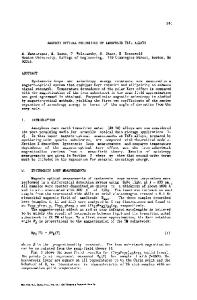