Polyaniline nanoﬁber (PANF) was synthesized using interfacial polymerization and was mixed with aqueous solution of poly(vinyl alcohol) (PVA) to form PANF–PVA binaries. The PANF suspension in water could be stabilized by PVA for more than 3 months due to the hydrogen bonding interaction between PANF and PVA. The speciﬁc characteristics of PANF–PVA ﬁlms was checked by scanning electron microscopy, conductivity measurement, thermogravimetric analysis, Fourier transform infrared spectroscopy, and cyclic voltammetry. The composite ﬁlm contained 25 wt% PVA (PANF–PVA25) casting at 105 °C was found to have a porous structure and good conductivity. The presence of hydrogen bonding interaction between PANF and PVA improves the electroactivity and electroactive stability of PANF–PVA25 for electrochemical applications. However, an ether linkage between PANF and PVA polymer chain was also found as casting the PANF–PVA ﬁlm at 200 °C, which is unfavorable for electrochemical applications.

Polyaniline (PANI) is unique in the family of conjugated polymers since it has rich redox chemistry and a simple and reversible acid doping/base dedoping process,1 which enables control over properties such as free volume,2 solubility,3 electrical conductivity,4 and chemical/biological sensitivity.5 Nanostructured PANI, especially nanorods, nanowires, and nanoﬁbers, offers the possibility of enhanced performance with a high interfacial area between PANI and its environment. As sensors, these electrically conductive nanostructures have greater sensitivity and faster response time relative to its conventional bulk counterpart due to their higher effective surface areas. However, a simple and effective process for preparing these nanostructures with desired characteristics in their composites remains a scientiﬁc challenge, and this is the issue that will be addressed in this article. Generally, the chemical synthesis of PANI uses aniline, an oxidant, and a strong mineral acid dopant.1 PANI nanotubes or nanoﬁbers can be prepared by template-guided polymerization within channels of a)

nanoporous membranes6 or zeolites.6,7 Adding structuredirecting agents, such as a surfactant8 or a comonomer,9 to the chemical polymerization bath is an alternative way to yield PANI nanostructures.8,9 When organic dopants having surfactant functionalities are used, micelle formati 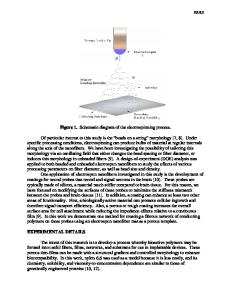 Electrochemical and photocatalytic applications of Ce-MOF