Templated Formation of Ordered Metallic Nano-Particle Arrays Amanda L. Giermann1, Carl V. Thompson1 and Henry I. Smith2 1 Department of Materials Science and Engineering, Massachusetts Institute of Technology, Cambridge, Massachusetts, 02139, U.S.A. 2 Department of Electrical Engineering and Computer Science, Massachusetts Institute of Technology, Cambridge, Massachusetts, 02139 U.S.A. ABSTRACT We have used interference lithography to create surfaces with di-periodic topography with periods less than 400 nm and formed gold particle arrays on these substrates through the dewetting of thin solid films. Under appropriate conditions, we have found that dewetting of gold films on di-periodic arrays of {111} bound pits in silicon leads to periodic square arrays of particles with very narrow size distributions. In addition, we find that topography can significantly reduce the diameter of particles formed by the dewetting process. We present a mechanism for this self-organization process based on modulation of the local curvature of a conformal film on topography. INTRODUCTION Interest in the fabrication of metallic nanoparticles arises from their unique properties that make them useful in a variety of applications, including magnetic storage arrays[1], quantum electronics[2, 3] and plasmonic waveguides. In addition, metallic nanoparticles have been found to act as catalysts for the growth of semiconductor nanowires[4] and carbon nanotubes[5]. For all of these uses it is desirable to have a straightforward method to fabricate the nanoparticles in large, mono-dispersed, well-ordered arrays. When used as catalysts for wire and tube growth, metallic particles may be formed either by using islands formed in the pre-coalescence stage of Volmer-Weber growth of films or by annealing continuous films and allowing them to de-wet to form islands. While these methods are very simple to implement, they result in randomly located particles with a broad size distribution. The mechanism of island formation on a flat surface by way of dewetting has been described in detail by Jiran and Thompson[6, 7]. A defect-free film is stable to all small perturbations, regardless if the system could reduce its surface energy by dewetting of the film. The creation of through-thickness defects via grooving at grain triple junctions is necessary to expose areas of substrate-ambient interface and initiate the dewetting process. Once a hole forms at a deep groove, the void widens and develops a thickened rim, which can then decay via a Rayleigh-type instability. Subsequent void growth occurs most rapidly through the minima of the rim instability, leaving behind long fingers of agglomerated film that then further decay into islands. We have investigated a technique for modifying the dewetting process to create narrower definition in both the spatial and size distributions. Our method is a variant of templated selfassembly in which we use lithographically defined topography in silicon substrates to alter the dewetting behavior of thin metallic films. 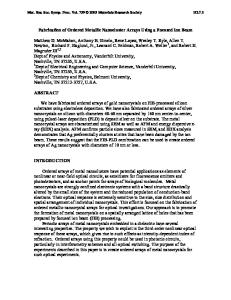 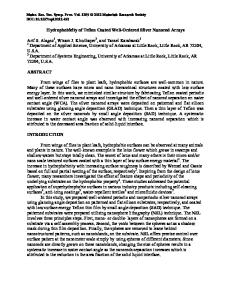