Formation of ordered arrays of gold particles on silicon and silicon-dioxide by nanoindentation patterning S. Ruffell1, D. K. Venkatachalam1, A. Shalav1, R. G. Elliman1 1 Department of Electronic Materials Engineering, Research School of Physics and Engineering, Australian National University, Canberra, 0200, Australia ABSTRACT Ordered arrays of gold particles have been fabricated on gold-coated Si(100) surfaces by pre-patterning the surface with a nanoindenter. During thermal annealing the Au is observed to accumulate within the residual indents. Once nucleated, the Au particles grow at the expense of smaller surface particles via an Ostwald-ripening process. The size of the Au particles is controlled by the initial thickness of the deposited Au layer, the size of the indentation (which is controlled with a high degree of precision), and the annealing conditions. Particles of ~200 nm dimensions are formed in indents of ~1 µm dimensions whilst nanoparticles of ~20 nm are observed in the smallest indents made (~50 nm). We have also demonstrated patterning of Au by indentation of a Au layer sandwiched between two SiO2 films deposited on Si by plasmaenhanced chemical vapour deposition. Here, cracking of the SiO2 layer occurs allowing Au to diffuse to the surface at the indented locations during post-indentation annealing. INTRODUCTION Ordered arrays of metal nanoparticles have a range of potential applications including plasmonics and templates for nanowire growth. Such arrays are typically fabricated using conventional top-down patterning techniques based on photo- or electron-beam lithography This approach includes serial and parallel techniques for patterning features typically in twodimensions. A number of unconventional top-down fabrication methods are being developed to circumvent the technical and financial limitations of the conventional processes. However, an important technological challenge that remains is to develop effective ways to assemble these nanoscale components on an arbitrary solid surface over large length scales. Pre-patterning of substrates to form ordered patterns of such particles has gained increasing interest as a top-down approach. There have been several techniques realized for lateral arrangement of such structures including pre-patterning by focused ion beam milling [1, 2], optical and electron beam lithography [3], nanosphere lithography [4], and porous alumina templating [5]. We present here an alternative approach that can localize nanoparticles at least as small as 20 nm in a simple and straightforward fashion. In this study we demonstrate a simple method of forming ordered arrays of Au particles on Si and SiO2 surfaces by pre-patterning using nanoindentation. During nanoindentation diamond tips of nanoscale dimensions are loaded into the sample surface under high precision load and depth control (µN and nm, respectively). Modern indentation instruments allow reproducible nanoscale plastic deformation to be produced with precise lateral positioning. Hence, single step p 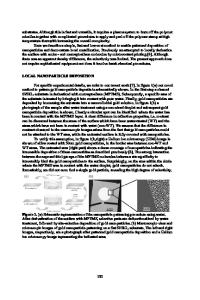