THERE has been recent interest in the application of sodium and calcium sulfates in the copper industry. A patent on a technique of copper refining using molten sulfates has been issued to Zamalloa et al.[1] During the development of this technology, molten CaSO4-Na2SO4 solutions were tested industrially. Different proportions of CaSO4, Na2SO4, and CaO were added to molten copper for purposes of minor element removal (As, Sb, Bi, Te, Se, Ni, Pb). The system is very promising for arsenic removal under oxidizing conditions (0.5 wt pct O in Cu). Lime additions were found to have a strong impact on the removal of As and Sb.[1,2,3] A knowledge of the phase equilibria in the system is important for process control and simulation, particularly a knowledge of the liquidus temperatures and the solubility limits of arsenates and antimonates in the molten sulfates. A good knowledge of the equilibrium phase diagram will permit the choice of proper compositions to produce a completely molten sulfate-arsenate salt. If the salt is mushy (containing a significant fraction of solids), it is difficult to skim from the refining vessel. On the other hand, it is important to work as closely as possible to, or even slightly beyond, the saturation limits to minimize reagent consumption and to protect the furnace lining by precipitation of salt. Previous articles have reported on measurements and thermodynamic modeling of the equilibrium phase diagrams of the CaSO4-Na2SO4-CaO[4] and CaSO4-CaO-Ca3(AsO4)2 systems.[5] The present article reports on measurements of phase equilibria in the reciprocal ternary CaSO4-Na2SO4Ca3(AsO4)2-Na3(AsO4) system by differential thermal analysis (DTA) and by an equilibration technique. The two binary P. COURSOL, Process Engineer, is with the Technology Centre, Falconbridge Ltd., Falconbridge, ON, Canada. A.D. PELTON and P. CHARTRAND, Professors, are with the Centre for Research in Computational Thermochemistry, Ecole Polytechnique, Montreal, PQ, H3C 3A7, Canada. Contact e-mail: [email protected] polymtl.ca M. ZAMALLOA, Process Engineer, is with Falconbridge Dominicana C. por A., Santo Domingo, Republica Dominicana. Manuscript submitted November 19, 2004. METALLURGICAL AND MATERIALS TRANSACTIONS B

subsystems CaSO4-Na2SO4 and CaSO4-Ca3(AsO4)2 have already been reported in the earlier publications.[4,5] The phase diagrams of these binary systems, calculated from the optimized thermodynamic models, are reproduced in Figures 1 and 2. The only previously reported measurements in the reciprocal ternary system are the DTA measurements of Zamalloa et al.[2] at compositions along the Na2SO4Ca3(AsO4)2 join. Based on the present experimental results, as well as on data from previous studies and on thermodynamic data for the pure components, the liquid and solid phases of the reciprocal system were thermodynamically modeled. Model equations were obtained for the Gibbs energy of each phase as functions of temperature and composition. In this way, all thermodynamic and phase diagram data are rendered selfconsisten 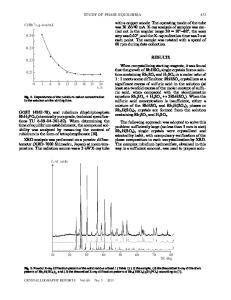 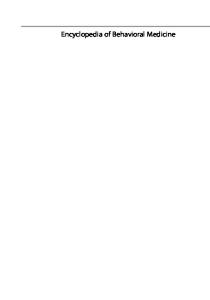