ABSTRACT The ordered Cu2 NiZn alloy is virtually unique in showing a changing antiphase domain structure according to annealing temperature. At low annealing temperatures there are isotropic domains and at high annealing temperatures there are cube-oriented domains characteristic of highly anisotropic boundary energies. This property allows a comparison of dislocation behaviour for otherwise identical materials: the roles of cube crossslip and cube glide can then be distinguished from other mechanisms, for example elastic torque effects and dipole formation. Mechanical properties and dislocation structures are examined over a range of test temperatures. The material having cube-oriented domain boundaries shows a much higher work hardening rate over an intermediate temperature range. Strengthening at low temperatures is dominated by dipole and multipole formation, whilst deformation above ambient temperature leads to the appearance of non-octahedral glide, more frequently on planes near {llO} than near {OOl). For the material with cube-oriented domain boundaries there is some evidence to suggest point blockage by cross-slip onto cube planes, leading to the higher work hardening rate at the intermediate temperature. This study emphasizes the multiplicity of slip systems which may operate and discusses the relative importance of anisotropic antiphase boundary energies and anisotropic elasticity effects. INTRODUCTION The high temperature deformation behaviour of many L 12 ordered alloys shows anomalous effects such as increasing strength and work hardening over certain temperature ranges. The commonly-accepted explanation of these effects is the cross-slip of screw-oriented superdislocations from the {Ill]} glide planes onto {OOl} planes where the dislocations are locked [1,2]. In the early model of Kear and Wilsdorf the superdislocation was considered to cross-slip completely onto the cube plane where further dislocation motion was prevented by the high Peierls forces. More refined analyses [3,4] consider the importance of applied stresses on assisting the cross-slip process and also indicate that re-cross-slip onto another octahedral plane will take place soon after the initial cross-slip process such that the overall appearance of the superdislocation is still that of a dislocation pair on an octahedral plane. The high Peierls forces inhibiting dislocation motion on cube planes arises because the dislocation cores can dissociate only on octahedral planes [5]. It has been shown that such processes are responsible for both the increases in work hardening rate and in strength over the intermediate temperature range [6]. While these models make use of the anisotropy of the antiphase domain boundary (APB) energy, it has recently been proposed that elastic anisotropic effects may also cause superdislocation blocka

Orientation and temperature dependence of slip in iron single crystals 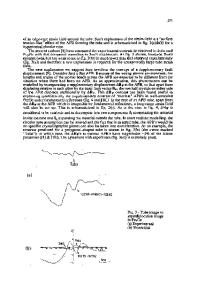