drimer family will be obtainable, which will facilitate practical applications for TPA molecules. YUE HU

Anomalous Behavior Observed in the Magnetic State of Untwinned Lightly Doped La2-xSrxCuO4 Single Crystals Researchers from the Central Research Institute of Electric Power Industry in Tokyo, Japan, have found unusual behavior in the magnetic susceptibility in detwinned La2-xSrxCuO4 (x = 0–0.03), or LSCO, single crystals. Parent insulating cuprates at high temperatures are considered to be two-dimensional (2D) Heisenberg antiferromagnets. The presence of doped holes introduces frustration into the spin system, and it has been postulated that, for the lightly doped region, the doped holes are distributed homogenously. A consequence of this homogenous picture is that once the long-range antiferromagnetic (AF) order is destroyed due to hole doping, the spin system must be isotropic. In the July 2 issue of Physical Review Letters, A.N. Lavrov, Y. Ando, S. Komiya, and I. Tsukada present a detailed study of the static magnetic susceptibility (χ) in LSCO crystals in the lightly doped region that demonstrates anisotropies in the “paramagnetic” state that are inconsistent with this picture of a 2D Heisenberg antiferromagnet. Their study of the low-temperature spin freezing in these untwinned crystals also reveals an anisotropic Curie constant and anisotropic “spin-glass” temperature. Parallelepiped samples of LSCO single crystals (~40 mg) were prepared such that all faces coincided with the orthorhombic crystal planes to within 1°, and the samples were annealed in helium to remove excess oxygen. To obtain untwinned crystals, the samples were cooled slowly under a uniaxial pressure of 15–30 MPa. X-ray analysis and magnetic susceptibility measurements were performed to measure the detwinning in the bulk, and the fraction of misoriented domains was estimated to be below 5%. The researchers used a superconducting quantum interference device (SQUID) magnetometer at fields ranging from 0.2 kOe to 5 kOe applied along the orthorhombic crystal axes, a and b (c axis normal to the CuO2 planes). Magnetic susceptibility was measured as a function of temperature along the a, b, and c axes in undoped (x = 0) AF samples. While the χc data agreed with previous studies, the χa and χb data displayed unexpected results, including a temperature dependence below the Néel temperature (TN) and a deviation of χa from χb above 596

~330 K in the “paramagnetic” state. These features reveal that suppression of the long-range Néel order in undoped LSCO does not make the system isotropic. For the lightly doped (x = 0.01) AF case, the researchers observed a similar deviation between χa and χb and no sign that an isotropic spin state was recovered above TN. Furthermore, said Lavrov, this behavior is not limited to the AF samples. Lavrov said, “We are surprised that the unexpected anisotropy persists to higher doping levels (x = 0.02, 0.03) even after the long-range AF order is expected to be destroyed due to hole doping.” The researchers report that at 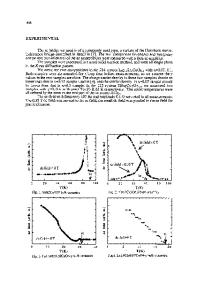