Hole Mobility and Antiferromagnetic Correlations in Underdoped La2-xSrxCuO4 High-Tc Cuprate Explained In order to better understand the origin of high-Tc superconductivity, researchers at the Central Research Institute of Electric Power Industry in Tokyo, Japan, have systematically studied the doping dependence of the mobility of holes in underdoped high-Tc cuprates. Specifically, the research group has examined the moderately to heavily underdoped region of the La 2-x Sr x CuO 4 (LSCO) cuprate system. Unlike other superconductors, the underdoped region of highTc cuprates has many unusual properties such as log (1/T) insulating behavior, charged-stripe instability, and the presence of a pseudogap. The experiments indicate that the x-dependence of the hole mobility, µ, at 300 K is strikingly similar to that of the inverse antiferromagnetic (AF) correlation length, ξ AF -1 , which is known from neutron experiments. The researchers discuss both an incoherentmetal picture and a charged-stripe scenario as possible theories to account for the observation. As reported in the July 2 issue of Physical Review Letters, the researchers prepared a series of LSCO samples using the traveling-solvent floating-zone technique. The samples were carefully annealed to remove the excess oxygen and ensure that the hole doping is identical to x. The crystallographic axes were determined, and the samples were shaped into platelets with the ab plane parallel to the wide face. Metallic charge transport in high-quality single crystals of LSCO was examined from lightly to optimally doped samples (x = 0.01–0.17), employing both in-plane resistivity and Hall coefficient measurements. At 300 K, the researchers found that the inverse mobility, µ-1, exhibits a metallic temperature dependence, throughout the underdoped region, down to x = 0.01 and is weakly dependent upon x, changing by only a factor of three from x = 0.01 to x = 0.17. The researchers said that this result is interesting since a superconductor-insulator transition occurs at approximately x = 0.05. Moreover, the researchers discovered that the x-dependence of µ-1 is analogous to that of ξ AF-1 in the whole underdoped region. According to the researchers, this is a notable similarity since there exists in this region a significant change in the ground state. This implies that the mechanism which governs the charge transport is the same from x = 0.01 to x = 0.17 and is related fundamentally to the background AF correlations. Although the idea of an incoherent metal accounts MRS BULLETIN/AUGUST 2001

for some of the observed results, the connection between the x-dependence of µ-1 and ξ AF -1 is better explained within the charge stripe scenario. “Actually, the lightly doped LSCO crystals show a number of surprising features in both the transport and the magnetic properties,” said Yoichi Ando, leader of the group, “and the result we report here suggests that the physics responsible for the lightly doped region is also responsible for the high-Tc superconductivity at 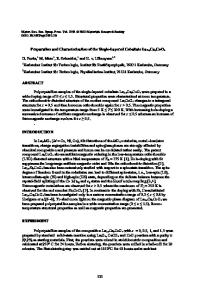