Fine Structure of the 3.42 eV Emission Band in GaN

ABSTRACT A luminescence band centered around 3.42 eV is commonly observed in GaN. Its appearance has been tentatively assigned to an oxygen donor level. Stimulated laser activity has also been reported at this energy. We present a study of this band in GaN grown by high temperature vapor phase epitaxy (HTVPE). The high quality of this material, with an excitonic line width as narrow as 3 meV, allows us to distingish four different peak positions of this luminescence band. They appear at 3.4066, 3.4121, 3.4186, and 3.4238 eV (T = 6 K). Within the experimental error the lines exhibit an equidistant spacing of 6 meV. They show a pressure behavior similar to shallow levels described by effective mass theory. We discuss our results in the context of incorporation of oxygen and structural defects in GaN.

INTRODUCTION The strong commercial interest for the group-Ill nitrides is primarily based on its application in light emitting devices. A characterization of the materials properties by photoluminescence (PL), however, is not just a natural consequence, but in addition can provide detailed information on the recombination processes involved. Sofar several characteristic luminescence bands have been described in GaN which can be attributed to one of the following: Transitions between shallow bound carriers in the vicinity of the bandgap, transitions in the blue-violet spectral range involving an acceptor level and a broad band in the yellow part of the visible spectrum of as yet unidentified

origin. In addition a strong band centered around 3.42 eV is frequently observed in low temperature PL spectra of GaN [1-8]. Lying energetically between the transitions of shallow bound carriers and acceptor related transitions this band recently attracted considerable interest. Several groups have reported stimulated emission at this photon energy in optically pumped GaN. Laser activity was observed at 3.424 eV (10 K) [9] and 3.43 eV (77 K) [10]. These values coincide with the 3.42 eV band described here. In thoses reports, however, no explanation could be given on the origin of this transition. In PL studies this transition has been found in GaN powder [2,5,7], single crystal needles [1], as well as in epitaxial films on sapphire (HVPE [4,6], MBE [3] and MOCVD [8]). The reported peak energy vary between 3.41 and 3.435 eV. The appearance of this band could not be correlated to special conditions of the growth processes in these reports. It has been reported that doping of GaN by incorporation of C [5], Hg or Li [7] in the Ga melt produces or enhances this emission. In a very recent report, however, it was found that both, injection of H 20 during MOCVD growth, or implantation of 0 can produce this PL band (3.424 eV) [8]. In the same work it was found that implantation of 0 in HVPE material produced this band at 3.415 or 3.424 eV and it was assigned to a donor to valance band (D'h) transition involving a 78 meV deep 0 related donor level. The observed PL features were broad and no fine structure could be resolved most likely due to 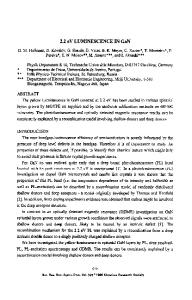 Fine Structure and Magnetooptics of Excitonic Levels in Wurtzite GaN

The Origin Of The 0.78 eV Luminescence Band In Strained Layer SiGe/Si

A Study of Indium Nitride Films Grown Under Conditions Resulting in Apparent Band-gaps from 0.7 eV to 2.3 eV

Temperature Dependence of the Fundamental Band Gap in Hexagonal GaN

Temperature behaviour of the yellow emission in GaN

Photoluminescence between 3.36 eV and 3.41 eV from GaN Epitaxial Layers