Ordered Arrays of Colloidal Gold Nanoparticles Fabricated by Focused Ion Beam Techniques Todd W. Simpson and Ian V. Mitchell Physics & Astronomy, University of Western Ontario, 1151 Richmond St, London, N6A3K7, Canada ABSTRACT Through-holes of diameter 35nm and larger were milled in 100nm thick silicon nitride windows by focused ion beam milling. The holes were sized to optimize capture of gold nanoparticles from a liquid suspension. The colloidal suspensions of gold particles were deposited onto the membrane and drawn through the holes by capillary forces. Efficient, single particle filling is demonstrated for both 100nm and 250nm diameter particles indicating that once a hole is filled, flow can be effectively blocked. We show that lithographically defined arrays of colloidal gold can be achieved with >98% filling. INTRODUCTION Colloidal chemistry can be used to synthesize and functionalize nanoparticles for a variety of applications. Integration of colloidal particles into microfabricated structures for sensor function remains a challenge. Templating of nanocolloids on a substrate using patterned recesses is feasible with materials such as silica[1,2], but such techniques are not effective for the much heavier gold nanoparticles. In this study we investigate the use of nanohole arrays to produce ordered, non close-packed arrays of gold colloids. EXPERIMENT Silicon nitride membranes 1mm square and 100nm thick in a 5mm square silicon frame, produced by KOH etching, were purchased from SPI Supplies. Gold nanoparticle suspensions were purchased in two sizes, from G. Kisker: 250nm (3.6e8 particles/ml) and from Corpuscular: 100nm(4.5e9 particles/ml). Suspensions were used at either full concentration or diluted with DI water. To facilitate FIB milling, a thin (~5nm) conductive layer of Au or AuPd was deposited on one surface of the membrane. In this study, all FIB milling and imaging was performed on the Western Nanofab’s Zeiss 1540XB CrossBeam FIB/SEM. Lithographic control of the beam was provided by the Nabity NPGS system. Hole diameters were measured by SEM imaging of the backside of the membrane. We were able to mill arrays of holes with controlled diameter from 30nm and up with edge to edge spacing from 50nm. Figure 1 shows a SEM image of a line of 35nm holes with 100nm period milled from the gold coated side. For samples that were to be loaded with nanoparticles, milling of the holes and loading of the suspension was performed from the uncoated side of the silicon nitride. The hole arrays do not significantly diminish the strength of the membrane, except where linear arrays of holes form a line of weakness when the spacing between holes is less than approximately 50nm. The membranes are able to support a pressure differential of 1 atm with milled holes present. 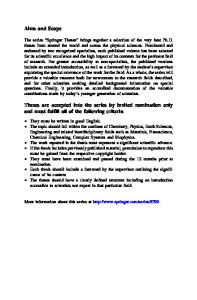