energy gap increases as the tin content increases. Growth of IV-VI semiconductors on Si substrates is advantageous because silicon substrates are available in large dimensions and are also less expensive than conventionally used IV-VI substrates. High quality layers of PbSe, PbTe and Pbl.xSnxSe have been grown heteroepitaxially on Si (111) substrates using group Ila fluoride insulators as buffer layers [2-4]. The growth of

these IV-VI layers on Si (111) substrates enables the realization of monolithic infrared detector arrays in which the infrared detection is performed in the IV-VI semiconductor layer and the signal processing is performed in the Si wafer. Device fabrication requirements of IV-VI lasers, however, favor growth on (100)-oriented silicon substrates since IV-VI lead salt materials cleave preferentially along their {100} planes and this allows formation of in-plane cleaved Fabry-Perot cavities. Even when IV-VJ materials are grown on (100)-oriented Si substrates, cleavage problems persist due to the tendency of Si to cleave along the (111 } planes. But this problem can be solved by lifting off the IV-VI epilayer from the Si substrate through selective etching of the MBE-grown BaF2 buffer layer. With a minimum of thermally resistive IV-VI materials, IV-VI lasers fabricated in this manner should have continuous wave (cw) operating temperatures greater than 260 K, within the range of thermoelectric cooling modules [5]. This paper discusses 371

the growth of PbSe and Pbl.xSnSe layers by LPE on Si (100) by a combination of MBE and LPE growth techniques. Characterization of the layers by optical Nomarski microscopy, XRD, FTIR spectroscopy and SEM is discussed in detail in the following sections. EXPERIMENT PbSe/BaF 2/CaF 2 buffer layer structures were grown on p-type Si (100) by MBE in an Intevac Gen II MBE system. Prior to growth, the wafer was cleaned by the Shiraki method [6] and heated at 1000°C for 30 minutes in the growth chamber to remove the Shiraki grown oxide. After oxide desorption, a 200 A thick CaF 2 layer was grown at a wafer temperature of 580°C. This was followed by the growth of a 3200 A thick layer of BaF2 at the same substrate temperature, annealing at 800 0C for 3 minutes and growth of an additional 1500 A of BaF 2 at 700°C. The final MBE layer was 1000 A thick PbSe grown at 280°C. The 3-inch silicon wafer with the buffer layer structure grown on it was cleaved to obtain 1 x 1 cm2 substrates which were used for subsequent LPE growths. All the substrates obtained from this wafer were designated as Wl 13. The PbSe/BaF2/CaF 2 buffer layer structure was grown by MBE on two other silicon wafers as well. The substrates obtained from these growths were designated as W222 and W245, respectively. On W222, the growth procedure used was similar to that described above except for the thickness of the CaF2 and PbSe layers which were 400 A and 2.2 gim, respectively. For W245, following the growth of a 570 A thick CaF2 layer, a 2000 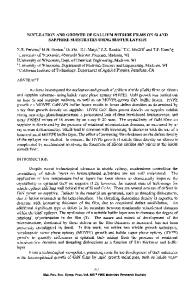 The Decomposition of Trimethylgallium and Trimethylaluminum on Si(100)