NTRODUCTION A critical issue in the fabrication of gallium nitride (GaN) devices is the achievement of significant and controllable p-type doping. It still remains a challenge because of the high n-type autodoping background present in as-grown materials and the large ionization energy of acceptors, such as Mg, Zn and Cd.1 The principal p-type dopant used for GaN is Mg with an ionization energy of 150-165meV.2 Such a large acceptor ionization energy is problematic and two to three orders of magnitude higher atomic doping level of Mg must be incorporated into GaN in order to achieve the desired hole concentration at room temperature.3 Although Zn and Cd are conventionally used as p-type dopants in the growth of other III-V compounds, Strite4 suggested that the d-electron core relaxation in these elements is partially responsible for the enhanced depth, making efficient doping at room temperature impossible. Beryllium (Be) was thought to be a shallower acceptor in GaN due to its large electronegativity and the absence of d-electrons. Ab initio calculations5 predicted that Be behaves as a rather shallow acceptor in GaN, with a thermal ionization energy of 60 meV in wurtzite GaN. More evidence from photoluminescence (PL) spectra revealed that Be acts as an acceptor with an optical ionization energy ranging from 90-100 meV,6,7 150 meV,8 to 250 meV.9 However, the size of Be atoms is so small that it seems more probable for them to stay at interstitial sites (Beint) rather than at substitutional sites (BeGa) in GaN. Theoretical calculations10 also pointed out that the formation energy of Beint is much less than that of BeGa. Interstitial Be behaves like a double donor so that selfcompensation is a significant drawback for the use of Be as an acceptor. That is why there is almost no achievement of electrical activiation of Be-doped GaN, except for Brandt et al. who obtained high mobility p-type materials from Be-O codoped cubic GaN by molecular beam epitaxy.11 In this paper, we introduce a new annealing process in which the Be-implanted GaN wafers were first annealed in forming gas, followed by annealing in a pure N2 atmosphere.

Electrical activation of Be-implanted GaN was observed for the first time. The results confirmed the low activation energy of Be as an acceptor in GaN and also showed the possibility of p-type doping by Be implantation. EXPERIMENT The undoped GaN layers used in the experiments were 2µm thick and grown on cplane sapphire substrates by MOCVD in a multiwafer rotating disk reactor at 1040 oC, with a ~20 nm GaN buffer layer grown at 530 oC in advance. The background n-type carrier concentrations were around 9×1016 cm-3. The as-grown layers had featureless surfaces and were transparent with a strong near band-edge luminescence at 3.44 eV at room temperature.

Dopant Activation in Boron-Doped a-Si:H and a-SiC:H by Thermal Annealing and Light-Soaking 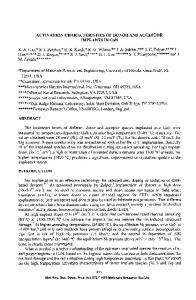 Activation Characteristics of Donor and Acceptor Implants in GaN

Preparation of activated carbon from sawdust by zinc chloride activation

Mechanism of Dopant Activation Enhancement in Shallow Junctions by Hydrogen

Si Implantation and Annealing of GaN for n-Type Layer Formation