Additive Manufacturing (AM) technology came about as a result of developments in a variety of different technology sectors. Like with many manufacturing technologies, improvements in computing power and reduction in mass storage costs paved the way for pr

Additive Manufacturing (AM) technology came about as a result of developments in a variety of different technology sectors. Like with many manufacturing technologies, improvements in computing power and reduction in mass storage costs paved the way for processing the large amounts of data typical of modern 3D Computer-Aided Design (CAD) models within reasonable time frames. Nowadays, we have become quite accustomed to having powerful computers and other complex automated machines around us and sometimes it may be difficult for us to imagine how the pioneers struggled to develop the first AM machines. This chapter highlights some of the key moments that catalogue the development of Additive Manufacturing technology. It will describe how the different technologies converged to a state where they could be integrated into AM machines. It will also discuss milestone AM technologies. Furthermore, we will discuss how the application of Additive Manufacturing has evolved to include greater functionality and embrace a wider range of applications beyond the initial intention of just prototyping.

Like many other technologies, AM came about as a result of the invention of the computer. However, there was little indication that the first computers built in the 1940s (like the Zuse Z3 [1], ENIAC [2] and EDSAC [3] computers) would change lives in the way that they so obviously have. Inventions like the thermionic valve, transistor, and microchip made it possible for computers to become faster, smaller, and cheaper with greater functionality. This development has been so quick that even Bill Gates of Microsoft was caught off-guard when he thought in 1981 that 640 kb of memory would be sufficient for any Windows-based computer. In 1989, he admitted his error when addressing the University of Waterloo Computer I. Gibson, D.W. Rosen, and B. Stucker, Additive Manufacturing Technologies, DOI 10.1007/978-1-4419-1120-9_2, # Springer ScienceþBusiness Media, LLC 2010

Science Club [4]. Similarly in 1977, Ken Olsen of Digital Electronics Corp. (DEC) stated that there would never be any reason for people to have computers in their homes when he addressed the World Future Society in Boston [5]. That remarkable misjudgment may have caused Olsen to lose his job not long afterwards. One key to the development of computers as serviceable tools lies in their ability to perform tasks in real-time. In the early days, serious computational tasks took many hours or even days to prepare, run, and complete. This served as a limitation to everyday computer use and it is only since it was shown that tasks can complete in real-time that computers have been accepted as everyday items rather than just for academics or big business. This has included the ability to display results not just numerically but graphically as well. For this we owe a debt of thanks at least in part to the gaming industry, which has pionee 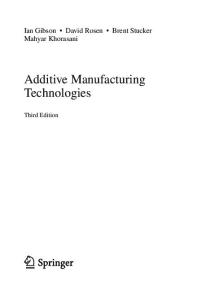 The Future of Additive Manufacturing in Sports