where ft is the atomic volume. Therefore, for one-dimensional diffusion12 (4)

It can be shown that continuity requires that

Introduction A modern integrated circuit (IC) is composed of 106 or more electronic devices. They are connected to form a circuit through the use of metallic films patterned into strips which function as wires to interconnect devices. These wires are usually simply referred to as interconnects. In an IC occupying the surface of a 1 cm2 Si chip, there can be 10 m of total interconnect length. This length is in the form of more than 106 line segments contacting pairs of devices and different segments of the circuit. This enormous number of wires is made possible by their small widths. Interconnect widths as small as 0.55 ftm are currently used in commercial circuits, and circuits and processes leading to smaller and smaller widths are continuously in development. During operation of an IC, interconnects carry current densities as high as 4 X 105 A/cm2. This should be compared with a current density of 102 A/cm2, the maximum allowed for house wiring. Thin-film conductors can carry these high current densities only because of the relatively good heat sinking provided by the Si substrate. Since interconnects consume a large fraction of the area of an IC, reducing the average interconnect widths allows the use of a greater number of devices per circuit for a given circuit area. Also, reducing interconnect widths, and therefore circuit dimensions, reduces transmission distances, thereby increasing achievable speeds of operation. Consequently, there is tremendous incentive to produce designs with interconnects that carry higher and higher current densities. Unfortunately, the ability to implement these designs is currently limited by reliability concerns, due primarily to a phenomenon known as electromigration. What Is Electromigration? Electromigration is electronic-currentinduced atomic diffusion. At current densities as high as those used in integrated circuits, there is enough transfer of mo-

mentum from the electrons to the atoms of the conductor to cause a biased atomic self-diffusion in the direction of electron transport. The "electronic wind" applies a force that can be expressed as

where B is an appropriately defined elastic modulus.2 If there is a zero flux condition at x = 0, for an infinite diffusive path in x+, at x = 0,

_ where D is the diffusivity of the atom, T is the temperature, k is Boltzmann's constant, q is the fundamental charge, E is the electric field, p is the resistivity, j is the current density, and Z* is an "effective charge," which is usually empirically determined for polycrystalline films. Note that while the formalism of Equation 1 has become largely standard, it deceptively suggests that electromigration is fieldenhanced diffusion of a charged species. The magnitude of the Z* term actually dep 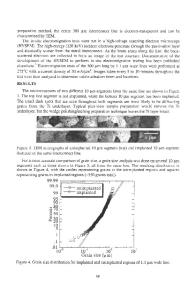 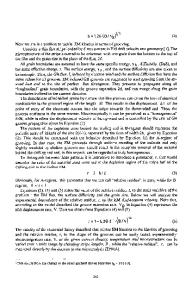