ABSTRACT We have characterized the electromigration performance of copper damascene interconnects using moderately and highly accelerated lifetime tests respectively at package and wafer level. Two metallizations have been studied : Chemical Vapor Deposition (CVD) copper deposited on CVD TiN (Process A) and electroplated (ECD) copper deposited on CVD TiN using 90 nm of CVD copper as a seed-layer (Process B). All metallizations were passivated with SiO2. Two line widths have been characterized : 0.6µm and 4µm. For wide lines, we obtained similar activation energies (Ea) for both metallizations (0.63 for process A and 0.65 eV for process B). For narrow lines, the Ea value is 0.8eV for CVD copper whereas it is higher than 1eV for ECD copper. For wide lines of both metallizations, failure analysis performed with a Scanning Electron Microscope (SEM) gave clear evidences that microstructural gradients have a strong impact on voids and extrusions formation (i.e. that grain boundaries are an active diffusion path in spite of low Ea values). For narrow lines, diffusion at the upper interface is believed to be the main diffusion path. From the reliability point of view, the extrapolated lifetimes of the metallization including ECD copper are much higher (1 to 2 orders of magnitude depending on the line width) than for CVD copper. INTRODUCTION As a leading candidate for future interconnect material [1], Cu has been intensively studied during the last few years. The damascene process is nowadays the most widespread process for Cu interconnects integration. It consists in dielectric etching and subsequent depositions of diffusion barrier and copper in dielectric trenches. The excess metal is finally removed through Chemical and Mechanical Polishing (CMP). Grain boundaries have been identified as the active diffusion path during the electromigration tests for polycrystalline etched Al interconnects. In polycrystalline copper lines, the activation energy (Ea) experimental values calculated from electromigration tests are generally substantially lower ( 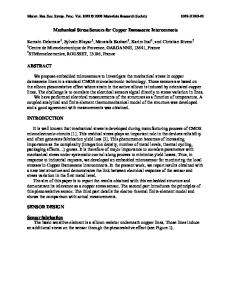 Precipitation of chromium in copper and copper-nickel base alloys