The Effects of Width Transitions on the Reliability of Interconnects C. S. Hau-Riege*, C.V. Thompson*, and T.N. Marieb**, *Massachusetts Institute of Technology, Cambridge, MA 02139 **Intel Corporation, Portland, OR 97124 Abstract Experimental and modeling studies of Al-based interconnects with narrow-towide transitions show that the width transition is a site of atomic flux divergence due to the discontinuity in diffusivities between the narrow and wide segments, which have different microstructures. Lifetimes have been experimentally determined for populations of lines with width transitions, which have varying line-width ratios and varying locations of the width transitions with respect to the line end. The electromigration failure rate is increased as the width-transition is moved closer to the electron-source via. Correlation of the effects width transitions on lifetimes allows determination of the critical stress range for void -nucleation failure, which was found to be 600 ± 108 MPa. INTRODUCTION Electromigration, which is the diffusion of atoms in an interconnect induced by an electric current, leads to changes in the local stress which originate at sites of atomic flux divergences, such as W- or Ti-filled vias. The development of tensile or compressive stresses can lead to interconnect failure due to voiding or extrusion, respectively. The atomic electromigration-induced flux (J) is described by: DC ∂σ (1) J= [Ω + Z * qρj] , kT ∂x where D is the atomic diffusivity, C is the atomic concentration, k is Boltzmann’s constant, T is temperature, Ω is the atomic volume, σ is taken to be the hydrostatic stress, x is the distance along the interconnect length, Z*q is the effective charge, ρ is the resistivity, and j is the current density. Failure by voiding will initiate once the stress somewhere in the line exceeds a critical stress, σcrit, which has been previously estimated to fall somewhere in the range of 100 MPa to 1 GPa [1,2]. It has been well established that microstructure plays a strong role in governing the reliability of Al-based interconnects [3-5], where lines with “bamboo” microstructures, in which grain boundaries span the width and thickness of the line, have low diffusivities and electromigration rates and consequently have high median times to electromigration-induced failure (MTTF). Lines with polygranular microstructures, in which the median grain size is less than the width of the line, have continuous high diffusivity paths along the line length and therefore have relatively high electromigration rates and a low median times to failure. Electromigration has been well-studied for simple straight-line interconnects. Today’s integrated circuits, however, have much more complex geometries. One common feature that exists in circuits but not test structures, is width transitions. These transitions are expected to affect reliability, especially for Al, due to associated

microstructure transitions. In this study, we address the reliability issues resulting from the interaction (or lack there

Effects of the entrained surface film on the reliability of castings 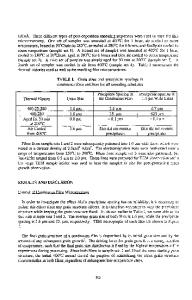 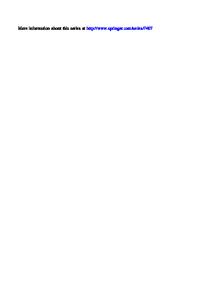 Clique-Width: Harnessing the Power of Atoms On the theory of phase transitions in magnetic fluids

The effects of predation on the condition of soft corals