Modeling Dislocation Loop Nucleation and Evolution in Germanium, Arsenic and Boron Implanted Silicon Ibrahim Avci and Mark E. Law Swamp Center, Department of Electrical Engineering, NEB Room # 535, University of Florida, Gainesville FL 32611 ABSTRACT A loop nucleation and evolution model in Si+ implanted Silicon was previously introduced [1]. In this study, the model is extended to predict end of range (EOR) and projected range defect nucleation and evolution created by different ion implant species such as Germanium, Arsenic and Boron. The model assumes that all the nucleated loops come from {311} unfaulting and the loop density and average loop radius follow a log normal distribution. The model is verified with the experimental data obtained from literature for Germanium [2], Arsenic [3] and Boron [4] implanted Silicon for different implant doses and energies. Modeling results are in agreement with the experimental results. INTRODUCTION Ion implantation is one of the primary ways of introducing impurity atoms into the silicon substrate. Jones et al.[5] showed that implant species play an important role on the defect formation and defect evolution. Light ions, such as boron, cannot produce enough damage to cause amorphization. Point defects created during implant usually form {311} defects and dislocation loops around the projected range after annealing which are classified as type I defects. Meanwhile, arsenic and germanium are heavy ions and they can produce amorphous layers if the implant dose exceeds the critical dose. EOR defects are the product of these heavy ions. Since most of the defects are extrinsic in nature, the amount of the excess interstitials generated by the implanted species will affect the defect densities. In contrast to silicon self implants, some of these implanted species may interact with the excess interstitials and vacancies generated during the implantation process. They may pair with interstitials and vacancies [6] and diffuse away from the damaged region. This reduces the super saturation of excess interstitials and vacancies in the damaged region. Thus, they indirectly affect the defect densities. To improve the device performance, it is very important to understand and model the unique material aspects of damage/defect accumulation during implantation and the subsequent annealing cycle. A model would also help device/process engineers to change and adjust their device structures and process conditions without having to build costly test lots. In this article we verify previously introduced loop nucleation and evolution model [1] for different implant species. Although the model was calibrated using Si+ implanted Silicon defect data, it was successfully used to predict loop nucleation and evolution in Germanium, Arsenic and Boron implanted Silicon. Interactions between Silicon interstitials implanted species (ie. Arsenic [3] and Boron [7]) were also incorporated into the model. Simulation results were validated against the experimental data [2][3][4]. The results are in good agreement

Diffusion of ion-implanted Boron and Silicon in Germanium

Modeling of Damage Enhanced Diffusion of Implanted Boron in Silicon 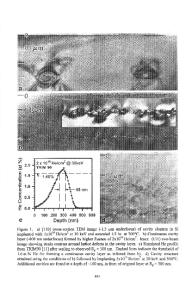 Cavity Nucleation and Evolution in He-Implanted Si and GaAs

Novel Luminescence Band in Silicon Implanted with Phosphorus and Boron