ARSENIC REDISTRIBUTION AND OUTDIFFUSION IN IMPLANTED CZOCHRALSKI-GROWN P-TYPE SILICON DURING RAPID THERMAL ANNEALING G.CHAUSSEMY*, B.CANUT **, S.N. KUMAR*, D.BARBIER* and A.LAUGIER* *Laboratoire de physique de la Mati~re, INSA de Lyon .20 Av.A.Einstein, F69621 Villeurbanne Cedex, France "**D6partementde Physique des Mat6riaux, Universit6 Claude Bernard Lyon I, F69622 Villeurbanne Cedex, France. ABSTRACT The effects of the implantation parameters (dose and energy) on the Arsenic redistribution and outdiffusion rate in (100) p-type silicon, after 7-12 s Rapid Thermal Annealing 14 in the 1100- 1200'C temperature range have been investigated. Four doses ranging from 2x10 to lxl0 16 cm-2 , and As' energies between 70 and 170 keV, have been studied. The experimental diffusion profiles obtained from the SIMS measurements, in complement with the RBS results, were modelled using the one dimensional Fick's equation with semi-infinite boundary conditions, using a concentration and temperature dependent diffusion coefficient D(C,T). The As diffusivity was classically attributed to As+V 0 , As+V-, and As+V - pairs with the related diffusion coefficients taken from the literature. A relatively good description of the As redistribution was obtained without introducing any transient or SPE effects. INTRODUCTION Rapid Thermal Annealing (RTA) is now a technologically viable alternative to the standard furnace treatments and scanned energy beam techniques. It seems to be undoubtedly the most attractive technique for removing the implantation damage in silicon devices. One of the potential advantages of Rapid Thermal Annealing (RTA) over classical furnace annealing is to produce a near complete activation of implanted dopants without excessive spreading of the doping profile [1]. Although amorphous layers can be eliminated at rather low temperature, it has been shown that extended defects can be completely activated from only 1100 'C onwards [2]. However, at this temperature, a significant redistribution of As has been pointed out by several authors, and the origin of this phenomenon remains controversial [3,4]. Moreover, high dose As+ implants are commonly used in the thin and highly doped emitter region of bipolar transistors. Indeed, for high dose As implants, it is difficult to separate the concentration enhancement effect in the dopant mobility from the possible contribution of a non-equilibrium point defect transient at the initial stages of RTA. Furthermore, to our knowledge, so far there has been no report on the As outdiffusion in implanted p-type silicon during RTA experiments. The aim of the present work was therefore to carry out a systematic study on the As redisrtibution during RTA, as well as to quantify outdiffusion rates using experimental RBS dose measurements and appropriate boundary conditions in the Fick's equation. A classical concentration-enhanced diffusion model was tentatively used to fit the As experimental profiles. EXPERIMENTAL Wafers of (100) CZ boron-doped silicon (10 0-cm resistivity) were implanted wit 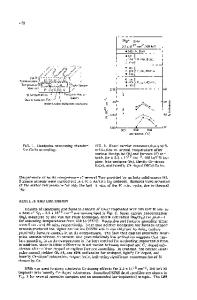 Redistribution of Mn upon Annealing in Ferromagnetic Mn-implanted Si